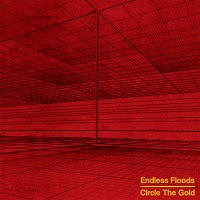 Ambient drone is something I have quite the penchant for, so was quite pleased to receive a poke about the latest Endless Floods offering, ‘Circle The Gold’. Having witnessed Year Of No Light at the second outing of Temples festival in Bristol, I was impressed by those, so finding there is a crossover with members was a good point for me.

There are only two tracks, but this is drone/post doom, so hardly unexpected on an album just shy of 40 minutes. I find the loud/soft effect used, along with a false ending in both tracks, makes for an excellent contrast – a well of noise pouring over the edges, sweeping you up in its tsunami-like effect against a soft, almost melodic backdrop. Imagine, if you will, the mighty Sleep creating a more ambient release and you will be sat in a fairly similar position to this.

It’s very easy to relax to, with a level of ambience that makes it easy enough to sit and listen to or to have as background music when socialising (in my case, whilst playing online games with friends!). The vocals are screamed but mixed into the background, a juxtaposition that actually works very well, so as to not overpower some quite crushing riffage.

The only real gripes I have about this release are the fact that there are only two tracks, meaning there is not a myriad of ideas thrown about, though this is again down to the drone nature of the track, while the tracks themselves get a touch too slow for me at times, which is where the sometimes minimalistic nature of parts of the songs works slightly against Endless Floods, which is a pity, as the songs are likeable. They could maybe take a bit of said minimalistic parts away and fitted in another track, which, for me, would have made it a bit more rounded as a release.

Overall, it is a good release, despite those two gripes. A bleak sonic landscape makes for a strong Drone release, with a sound that puts me in mind of man lamenting its own downfall immediately after an apocalyptic event. It’s certainly more into the drone niche than it really has to be, meaning it will have limited accessibility for people outside of those interests, though post-hardcore and post-metal fans may also find some interest here. A positive addition into the genre.