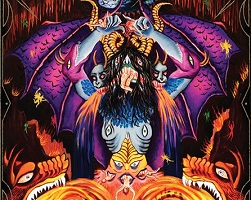 The subject of good and evil in heavy metal in 2019 seems largely a moot point – after all, while we all will glory in the theatrics of a band like Venom or Hell, there remains a bitter aftertaste which has arisen from self-styled edge-lords who feel invoking national socialism and similarly pig-headed points of view is the only way to truly shock. Yawn. Casting eyes back to a simpler time, everything about Devil Master screams ‘SATANIC PANIC’, sure to get the Tipper Gores and Mary Whitehouses up in arms, if such a thing were still possible. They achieve this through sheer, unabashed aural terrorism; their sound existing largely in that thrash-tastic space between proto-thrash and first wave black metal, this is a band that will have all Venom, Celtic Frost and Hellhammer fans positively frothing at the loins.

Unlike so many of their forebears, Devil Master are able to enjoy a production which allows each and every instrument to howl gleefully into the night whilst not sounding like it was recorded on a potato. As such, ‘Satan Spits on Children of Light’ sounds loud and nasty, its power communicated in the classic combination of almost militaristic, rhythmic drums (with a few blast-beats for good measure), ever-present bass, shrieking guitars and a howled vocal that owes decidedly more to the Norwegian second wave of black metal.

With such a simplistic set-up and classical sound, it doesn’t feel like Devil Master should feel so fresh, and yet a kind of magic is created in every blast and snarl. The relative shortness of each track ensures no song ever drags on too long to be anything less than a sudden, sharp shock on the senses, and when the band let loose it feels truly exciting and hideous all at once. Take the kind of genre-savvy reinvention of a band like Power Trip and apply it to early black metal and you’ve got the kind of winning formula Devil Master are drinking from; the record doesn’t quite feel so anthemic nor unstoppable as ‘Nightmare Logic’, but this is a record which knows its way around the tropes of 80s-era extreme metal enough to deliver up one hell of a punch.

Among the album’s more anthemic moments is ‘Desperate Shadow’, a track which ramps up the moshable elements of Devil Master whilst not dialling down on any of the nastiness. You can almost smell the blood and leather, and the band don’t let up for a moment as the track wails away gleefully. The album’s existence in such an unwavering space of extremity ensures that if the listener enjoys the first couple of tracks, chances are they’ll be in love with the whole album – and remarkably, the band exercise enough editorial control to ensure that each of the 13 tracks sears themselves into the brain without outstaying their welcome.

As far as debuts go, Devil Master offer up everything you could want – a furious declaration of intent, some impressive theatricality and a few genuine monsters all caged up and ready for release. Quite where the band go from here remains to be seen, but if they can surpass the quality ‘Satan Spits on Children of Light’ on their next release, we could be looking at something very special indeed.