Desert Clouds – ‘Nothing Beyond The Cage’ (Self-Released) 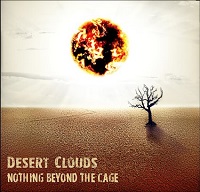 Originally formed in Naples a little more than a decade ago, before relocating to London at the turn of this decade, one could be forgiven that Desert Clouds’ monicker reflects a desire to recreate the sounds of the Mojave.  And, while there are elements of stoner permeating this, their second mini-album, it is also an opus that transitions between grunge and psychedelia, via some trips down doom-ish side alleys to create an eclectic mix of sounds which intrigue the listener throughout its short (just 27 minutes) running time.

‘The Outcast Trail’ opens with a Soundgarden-esque picked intro, its genteel atmosphere soon thrown into chaos by a dramatic explosion of sound, which disappears as soon as it arrives as the introspective mood of the main musical and lyrical motif returns, the two miens swapping blows throughout the remainder of the tune, as a Nirvana-ish sense of chaos threatens to overwhelm the gentility of the underlying theme.

Lead single ‘Speed Of Light’ is a bit more consistent in its approaching, spinning a web of darkened psyche grooves mashed with a space-rock-edged bass and drum rhythm, while David Land’s winding guitar motif pokes and prods with an effective alacrity before crashing through to the foreground and taking the track by the balls. Meanwhile, Val Wallace’s vocals are very much an integral part of the sound, often pushed into the background rather than overly dominating it, which makes the mix all the more effective.

‘Take Off’ may not quite do that, but is a dark slice of psychedelia punctuated by some acerbic guitar and haunted by Wallace’s almost banshee-like wails, while ‘Under Tons’, also a previous single, mixes light and shade with the effectiveness of a highly trained baker moulding his dough, the guitars again really setting the atmosphere over the laconic rhythms created by the wonderfully named Julius Caesar and his compatriot Andrea Orabona. ‘Overmore’, on the other hand, stomps and swaggers with the assurance of a Mafia hitman about to take out one of his Don’s opponents, it’s thickness and density providing the heaviest moments on the opus.

‘The Judgement’ returns to the introspection of the album’s opening section, a reflection in a dark mirror, Wallace’s wail complementing the moodiness of the musical theme.  Closer ‘Whistling In The Rain’ sees them deftly combine doom, in terms of Caesar’s fuzzed out bass riff, and grunge, in terms of the overall groove of the song, while retaining the psychedelic feel which permeates the entity of the release.

Overall, ‘Nothing…’ is an extremely introspective album, moody and dense but possessing a deftness of touch that many bands seek to ignore. Everything combines effectively to accentuate the album’s concept, which is “a journey throughout an imaginary universe where the spirit gets stuck into space-time’s distortion, until it eventually gets rid of all the constrictions that used to cage it”. And a no more fitting soundtrack for this trip can I imagine.