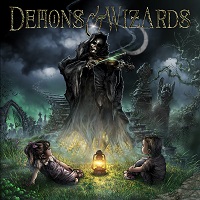 Demons & Wizards, the power metal supergroup led by Hansi Kirsch and Jon Schaffer, haven’t had the most prolific recording career; in the 21 years since they formed, they’ve only managed to get two records out. Blind Guardian and Iced Earth have kept both guys busy, but they’ve finally got back together, are heading out on tour this summer across Europe and there’s a third album on the way. As it’s been a while since we last heard from them, it’s not surprising that Century Media have decided now is a good time to reissue their previous output, giving us a chance to shine a spotlight on them once again.

So for anyone that missed out first time around, their self-titled debut and it’s follow-up ‘Touched By The Crimson King’ are back in all their nerdy, over-indulgent glory. Schaffer’s crunchy riffing and Kirsch’s soaring vocals make for a winning combination and some of the material here is so good, it makes you wonder why it’s taken them so long to get back together.

Among their fanbase, the conventional wisdom is that the first album is the superior effort and that opinion still holds water. ‘Heaven Denies,’ ‘Poor Man’s Crusade’ and ‘Blood On My Hands’ sound magnificent two decades from when they first emerged. There’s booming choruses and frenetic guitar work aplenty, while tracks like ‘Fiddler On The Green’ show they can do ballads just as well. ‘Path Of Glory’ and ‘Winter Of Souls’ have more hooks than a five blokes on a fishing trip, while the triple song centrepiece comprising ‘Tear Down The Walls,’ ‘Gallows Pole’ and ‘My Last Sunrise’ is absolutely huge.

In short, it’s a magnificent example of high-quality power metal. This self-titled record is a grand, enthralling listen with just enough darkness fraying the edges to prevent it falling into the realms of cheese. Nice cover of ‘The White Chant’ by Cream to round it off as well. 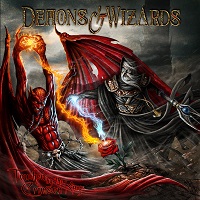 With the debut casting such a massive shadow, ‘Touched By The Crimson King’ doesn’t quite match up but dismissing it would be a mistake. ‘Crimson King’ itself is a belter of an opening track, with a level of theatricality that Nightwish would kill for and Kirsch putting in an inhuman vocal performance. ‘The Gunslinger’ gives some idea of where Orden Ogan would pinch their best ideas, while ‘Terror Train’ is muscular, razor-edged power metal at its finest. The guitar work here sounds like a hundred synchronised jackhammers and it’s not even remotely surprising it was the lead single when this first came out.

‘Seize The Day’ meanwhile is this album’s “lighters in the air” moment. It’s a slow-paced and bittersweet number that is perfectly suited for a late night, drunken sing-along when you’re feeling overly dramatic and even the confused faces of bouncers and bystanders can’t put you off. ‘Love’s Tragedy Torn Asunder’ gives it a run for its money, but here the album starts to dip slightly. ‘Dorian’ is overlong and at times feels like a leftover from Iced Earth’s ‘Horror Show’ album, while ‘Wicked Witch’ isn’t bad but is overshadowed by the melancholia of the “slow version” which appears later among the bonus tracks. Their climactic cover of ‘Immigrant Song’ however ends proceedings on a high note. Throwaway perhaps, but lots of fun regardless.

What with these being reissues, there’s a few extras for long-term fans to sink their teeth into as well. Truth be told though none are worth spending much time on, mostly consisting of demo versions of the existing tracks. It’s intriguing to hear them in a slightly rougher-round-the-edges format, but there’s no reason to come back and most will only get played once at most.

Even 19 years on though, ‘Demons & Wizards’ is an essential purchase for any power metal devotee out there. ‘Touched By The Crimson King’ isn’t quite in the same league and if you play both albums back to back, it’s easy to feel slightly let down by their second full-length. However, it is still very good and taken entirely in isolation is a worthy addition to the collection of any horse-riding, sword waving metalhead with truly pristine hair. Their main jobs may have kept Kirsch and Schaffer occupied, but this has only whet our appetite for their third; 2020 can’t come quickly enough.