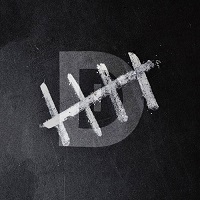 They say that some of the best creativity comes out of adversity and trauma. The past nine months of various pandemic-infused global lockdowns has proven this point, with some great music having been produced in what could be seen to the most impossibly adversarial circumstances. But, it is also an ethos which has been exemplified by Wisconsin’s Deathless Dogs for the past decade, from when guitarist/singer Eddy Krogman started sharing lyrical ideas based on his experiences in the Iraq War with his childhood friend, drummer Dan Speer. In the intervening period, the duo have gone on to self-release three albums, with a fourth in the pipeline. In the meantime, they have presented us with this cathartic five-track EP…

I must admit that when I think of Wisconsin I think of the knowing, whitened grin and knowing wink of Arthur Fonzerilli, Chachi and the kids hanging out at Arnold’s Diner, the pursuant breezy pop punk of Weezer’s ‘Buddy Holly’ video and, more latterly, it’s pivotal role in this past summer’s BLM street protests… If I had to draw any comparisons with any of these connections, then it most definitely would be the last mentioned, as ‘Five Across…’ is as far removed from the feelgood factor of ‘Happy Days’ as it is possible to get, and purveys a dark message more in common with the United States of Trumpton’s more recent inglorious history – which, of course, should not be a surprise given the band’s origins and the legacy with which Krogman and many of his fellow veterans undoubtedly continue to live…

And trauma continues to remain very much at the centre of the musical message delivered by these two rock ‘n’ roll dogs, as they once again explore and extrapolate the darker aspects of the human psyche, while at the same time expounding that same psyche’s ability, and desire, to overcome the obstacles thrown in its way and get on with some semblance of a normal life (a message particularly apposite in the current climate of continuing daily uncertainty). It is also a plea for respect, a call which already has been answered, and will continue to be so, by the legions of rock ‘n’ roll fans who already have rallied to the DD standard.

Musically, the Deathless Dogs are beautifully unquantifiable in generic terms, touching on elements of retrospective Americana, protest punk, gothic noir and alt-country, while also inhabiting territories betwixt and between the likes of heavy blues and stoner grooves which sees them appeal as much to fans of Mastodon and Clutch as much as followers of Hank III or even the dark lord himself, Nick Cave. The result is a cataclysmic and, as mentioned, cathartic album. One which is weirdly enervating, and undeniably challenging, especially in the lyrical department.