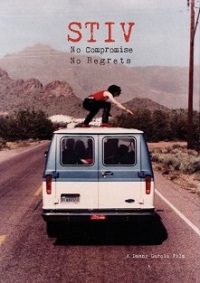 It’s been a while since we checked in at the Dead-End Drive-In… so long, in fact, that the popcorn has gone stale and the beer is flatter than the road leading up to it (not that it ever was the liveliest tipple in the first place).  But, what better way to reacquaint ourselves with the flicker of the golden screen than with this documentary about one of the true icons of the punk rock ‘n’ roll genre?

Said individual, of course, should need any introduction to the ÜR massive… but, we have been recruiting new readers quicker than Theresa May has been losing votes of confidence, so a quick piece of background for the uninitiated. Born in Ohio and christened Steven John Bator (making him one of the few punk stars of his generation who had to fuck about with his name for stage purposes), Stiv Bators played a vital role in the creation of punk ‘n’ glam as we know it today, as a founder of the subsequently extremely aptly named Dead Boys and later frontman of the much under-rated Lords Of The New Church.

Like most good detective stories, ‘No Compromise…’ starts at the end of Bator’s life, when he had relocated to Paris to be with his girlfriend Caroll and was seeking to rebuild his musical career after the break-up of LOTNC. One particularly revealing early interview is from Ray Hanson, then guitarist with Thee Hypnotics and later The Whores Of Babylon, who talks about Stiv’s “many plans” for the future: “he was only 40”! These included, of course, the ill-fated “supergroup” with the likes of Neal X from Sigue Sigue Sputnik, Dee Dee Ramone and Johnny Thunders. Of course, the story quickly goes back in history and what follows the next while is the sort of standard documentary fare, with childhood friends and early bandmates relating stories of his nascent career, complete with the usual complaints about the protagonist’s own objectives over-riding those of his then collaborators.

The Dead Boys section is a fairly standard rockumentary, detailing the excesses of the band’s early career, their near implosions, their disappointment with the second album, before the story of the Wanderers follows the same path, only to reveal one of the most important aspects of Stiv’s character: his self-destructive nature. And that is the conclusion the documentary seems to eventually arrive at: that, despite the relatively minor nature of the circumstances which ultimately led to his death (he was hit by a car while crossing a street in his adopted home city of Paris), it was these same circumstances that gave him the excuse he sought to shuffle off this mortal coil under his own terms.

But, at the end of the night, ‘No Compromise, No Regrets’ is a valuable insight into the life and psychology of one of punk rock’s more troubled and everlastingly enigmatic souls.