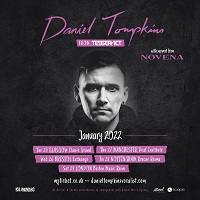 So, after what’s started out as an another almost constant stream of cancellations of various acts, I’m finally going to a show that’s actually an incredibly special one to me in that every person in the bands tonight are infamous amongst the prog and tech-metal circles and regulars at UK Tech-Fest.

With support from Novena fronted by Haken front man Ross Jennings, backed by an ensemble cast of Moat Lowe (Slugdge, No Sin Evades His Gaze), Cameron Spence (Ravenface), Dan Thornton (No Sin Evades His Gaze) and finally Harrison White (More projects than I can count and professional music boffin) – to say that this room is packed with some of the biggest musical talent that the UK has to offer right now would be an understatement.

Right on cue, Novena are up, and I finally get to bear witness to them live after so many delays, opening with my favourite, “Sundance”. A few cheeky winks exchanged with the guys on stage, I’m sucked right in with that chorus, it’s a strange sounding song with its middle eastern feel and almost flamenco guitar playing, but without missing a beat, time for ‘Disconnected’. Ever heard Pop Prog? Well this is it.

Ross stamps around the stage like he owns the place in his signature style, a showman in his element. Sometimes forgetting how long these songs are, he lets everyone know there’s only two songs left and is going to make a medley of sorts starting with ‘Indestructible’, I feel like the sets barely started! And finally finishing with blending it into ‘The Tyrant’, what feels like a short but ultimately very sweet set that I’d been waiting a long time to see live, it’s over and I’m wanting much more.

Admittedly I was hoping we’d see the audience make a complete mess of ‘Corazon’’s clapping intro, but Novena smashed out a solid set showcasing a great variety of their back catalogue. See you at Tech-Fest lads!

Slightly earlier than I thought they’d be on, just as I was about to go for a cig, the room darkens, heralding the introduction of Dan and his ensemble band hitting the stage. Dan’s signature vocal style tears through the room, the band providing fat chugging tones, no surprise with the wealth of talent and experience on stage!

It does need to be said that this is absolutely not TesseracT but you can definitely feel that with his solo stuff that the influence is there with the ebb and flow between chugs and ethereal backing strings all building up to soaring epic choruses. Without a doubt he’s carefully picked each part of the band to bring his solo album to life, they’re really doing it justice and it’s a rare privilege to see this sort of stuff in a smaller, intimate setting like Manchester’s Deaf Institute.

Remarking that he’s not played guitar and sang in front of an audience since he was 17 and is now pushing 40, the display he’s putting on along with the rest of the band in showcasing his solo work is without a doubt the culmination of many years of hard work and it shows. Putting on these sorts of shows is what compels me to go back and listen to their recorded work, as it often changes the context of how you hear it and accentuates what the artist was intending when they put it together.

I’m quite thankful for two reasons here, one in that I’m glad that this is what punctuates the first show I’ve seen in 2022, which is already proving to be a difficult year for live music, but secondly, that it’s been a fantastic show from both bands, and I’ve thoroughly enjoyed it. I live for these sorts of unique experiences, and I will absolutely never take for granted the sheer joy that it brings along with it.

I do hope I get to see this live again, but after I’ve bloody rinsed his last album so I can sing along this time!