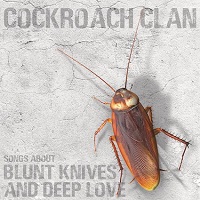 I was not ready at all for what I heard when I dove into this album. Maybe it is the name, Cockroach Clan, or something else. For some reason, I was expecting death metal what I got was old school punk with some flairs of an almost southern rock influence. That could just be a bias due to some songs having that clear twang or a telecaster. I could see this band playing the bars down on the strip in Nashville and packing the place. This was a pure, unadulterated good time.

I would love to see this band live. The album has so much energy on its own I can practically picture the performance. The dynamic between the lead vocals and the backup is perfect and the composition is set up very well to complement every member. No one overpowers the other. Everyone is suited very well to the other members. The talent is so well balanced it is just a joy to listen too.

I do want to focus in on the guitar for a bit because this is a guitar lovers album for sure. With most bands, there is a guitar tone that you can point to and identify as that band instantly this is not a bad thing by any standard and is often what we love about a given band. However, here we have a few different sounds all within the same theme. The amp has a really nice crunch dialed in that lets the individual guitar’s tone show through very well. There are times where you can immediately identify that they are using a telecaster by the signature twang or the clear tone of a strat set for the bridge and middle. It was fun to try to see all the different slight tonal variations they used. Not to mention that there are great solos to be had here.

The main question you should be asking yourself is why have you not ordered this album yet? This is far to much fun and I think that your life is missing something without it. Songs about Blunt Knives and Deep Love is truly passionate. You can hear how much fun the band was having while making it. It really shows and if they are having fun the final product can only be better because of it. Apparently, this band has been around a while but somehow I have not known about them. Don’t make the same mistake as me. Pick this one up.