CNTMPT – ‘Towards Neglect’ (Into Endless Chaos) 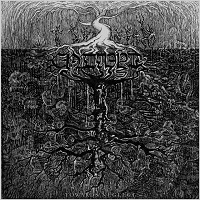 CNTMPT play the sort of intense black metal that immediately sinks both its purveyors and those listening to it down into the darkest recesses of the ninth level, bypassing every other layer of Hell in a headlong rush to get itself, and the participants in the journey, to its destination by the most express route possible.

This mysterious German trio – they are known only by their initials, revealing only that they emanate from Leipzig – came together in 2009, releasing their first, self-titled blackened mass five years later. Now, hurtling headlong into their tenth anniversary year, they have surfaced once again to bring their largely instrumental approach to the art of BM out of the shadows and into the light, before retreating once more into the darkness of the anonymity from whence they came.

Their sound is built on the traditional BM mien of winding riffs and harmonies over blastbeat drums and rumbling bass lines. As mentioned, their sound is largely instrumental, as any vocals take the form of indecipherable chants and searing screams in the background, evoking the path its proponents have chosen to take. In this way, they use the contributing voices to add to both the instrumentation and the overall atmosphere which the seven tracks – two of which take the form of short acoustic preludes – evoke.

Their name may suggest that CNTMPT show just that for accepted norms. In fact, they stick very rigidly to those of the BM genre: yes, they might eschew lyrics in the traditional sense, but they still retain the characteristic death growls which intermingle with the repetitive musical miens. In fact, with the exception of the two aforementioned prefaces (opener ‘Ascend Through Winds’ and ‘The Arrival’) and the psychedelic closer ‘Magical Herbs’, the latter repeat themselves so often that you could be forgiven that you are listening to one epic 41-minute movement: but, then again, that may well be the intention.  Whatever the intent, the result is a fairly standard evocation of the black metal sound which will please diehard fans of the genre but will do little to appeal to dabblers, or indeed acolytes, seeking new sensory experiences within the form.