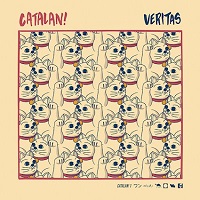 ‘Veritas’ is the debut album from Ewen Friers’ solo outfit, Catalan!. Previously making a ruckus in the North Coast-based post hardcore band Axis Of., Ewen has spent some time leading up to this album with a series of singles and tours abroad which have no doubt informed the sound on the album.

‘Veritas’ is exhaustive in its exploration of ideas, in the best possible way. No stone has gone unturned when forging these songs in the fire. With multiple layered vocals, harmonies, additional percussion and synth peppered throughout the record Ewen has created an album that for as much as it might be a local record it’s a world record, taking inspiration from  punk to hip hop to….calypso (probably), sometimes and indeed often all with in the same song.

The record doesn’t just go from one end of the spectrum to another it dances all over it, balls it up, chews it and spits it out, only to dance all over it again. The use of language and vocabulary on the record is almost Dylan-esque, playing with words like a cat toying with its mouse prey. All supported by infectious melody after infectious melody. Each song is crafted around multiple hooks, it could be the obvious guitar or vocal hook but there’s also drum hooks, bass hooks and percussive hooks.

It feels like the entire record is designed to burrow its way into your brain and live there for days leaving you whistling guitar lines or singing ‘down with the rebel, down down with the rebel’ while you’re browsing the produce at Tesco.

The production on the record is fantastic, especially with the many layers of instrumentation and vocals it never feels cluttered, overcrowded or muddy and when there are multiple things going on it always feels like its building to a crescendo and serves purpose rather than merely another voice for the sake of it. Similarly, the sounds on the record are lush, from sparkly guitar tones on ‘Roussillon Serenade’ to gnarly filthy bass on ‘Alive’ or ‘Oka’ which for some reason I can’t listen to without thinking of 99 Red Balloons, to the pulsating synth sounds on ‘Cornelius’, they all create the sound of Catalan.

The drumming on the record is phenomenal; Alan Starrs, previously of another North Coast hardcore band, Lantern for a Gale, provides the backbone for every twist and turn on this record his approach to the drums on this record compliment the songs perfectly and as previously mentioned creates hooks with his drum patterns or use of percussion. Not to mention the insane ending to ‘Single Source’.

Over the albums’ 14 tracks there are two spoken word pieces; it’s an interesting inclusion, they do serve to break the album up into different sections but does somewhat kill the flow of the record. They’re not bad but from a man that is so overflowing with ideas I would’ve liked to have heard another two songs.

‘Veritas’ means truth and great art is meant to hold a mirror to the world and reflect it back on itself in all its beauty and ugliness in equal measure. Ewen is definitely doing that with this record, it’s his truth, it’s his filter through which he views the world around him. Front to back ‘Veritas’ is an amazing record, well-crafted songs that skew traditional structure and song writing while still providing hook upon hook in each song, the musicianship on the record is second to none and always in service of the song, never flashy for the sake of it.

After listening to the record, you feel like you’ve been on a journey, packed into a car and travelling round with friends experiencing whatever weirdness the world throws at you. Don’t forget your toothbrush and pack light.