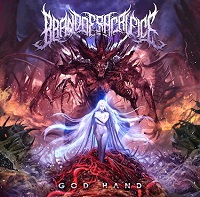 Quintet Brand Of Sacrifice, are back at it, producing their debut full length album, ‘Godhand’. Formed in 2018, Brand Of Sacrifice have previously produced an EP. This was well received by fans, which gained them a high following. The debut album is nothing short of pure hell and chaos, being mainly grouped to the genre of death metal. Although, the album has something for everyone, placing genres such as hardcore and slam into the mix. For fans of Bind The Sacrifice, Within Destruction and  The Black Dahlia Murder.

The album as a whole is absolutely mental. It is quite clear that the band have matured, and expanded their sound, compared with the previous release. The vocal range is much vaster; don’t shy away at this point, as no, they haven’t done a Suicide Silence trick on us…Instead spitting gnarly lows, with crushing gutturals. The album conveys the level of talent that Kyle Anderson has to offer. With so many bands already in the genre, and many more arising, it is a crowded market where many names get looked over. However, the band have mastered their sound, making them recogniseable and not understated. On this note, I don’t think I would be wrong in saying that the level of heaviness has to be executed right, otherwise things become messy. These guys have got this down to a T, this is helped by having many hooks and chorus sections with clear structure.

Opening song, ‘Begin’, demonstrates that these guys are not taking a seat back. First track in, and we are given pure devastation. With gut wrenching vocals, relentless riffs and a crushing breakdown. It provides an insight, into the hell that is yet to erupt with the rest of the album.

Interludes are sometimes overlooked in albums, but ‘Hill Of Swords’ is a piece of art. It helps to break up the album, as it projects a very different vibe and sound. Atmospheric music gradually builds up, creating a sense of an enigma. It highly reminds me of the type of music that would be overlaid in an intense scene from a film.

To sum ‘Godhand’ up in a few words: it is heavy as fuck.