With Sabaton’s rallying warcries still getting the blood pumping come Saturday morning, we’re undertaking some roaring of our own on Saturday morning, courtesy of the standstill traffic on the M6. Arriving far too late to catch Cancer Bats’ set (though we do catch the anthemic final notes of their ‘War Pigs’ cover), we head into Catton Hall for our first band of the day. Swallow The Sun possess an incredible melodic take on doom/death, which while on paper doesn’t seem like the best way to get the day started, in practice is a grand way to kick things off. Measured and restrained, the band’s set is a total change of pace from the previous evening’s lunacy, all majestic doom melodies and crushing heaviness – just the way we like it. 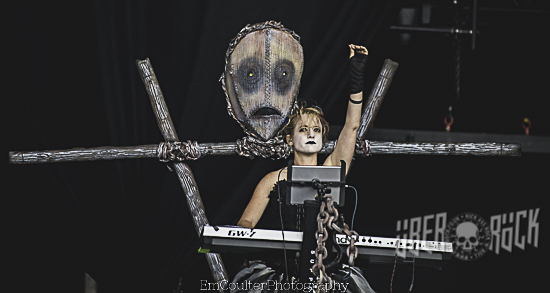 Coming from just up the road in Nottingham, Evil Scarecrow are Bloodstock’s house band in more ways than one. Pulling the first massive crowd of the day, the band arrive to the kind of conqueror’s welcome that is normally reserved for the biggest and most revered bands in the scene. Unfortunately, they also become the first band of the day to fall foul of the weather, the wind blighting the set throughout and limiting the amount of stage effects they can use. Not that it matters much – the crowd are more than happy to pick up and sing along to every single song in the set, throwing shapes for ‘Robototron’, ‘Crabulon’ and ‘Space Dementia’, while the stage is variously invaded by robots, astronauts, a flailing arm man and a blizzard of confetti, begging the question ‘just how big could this set have been?’. The band also bring out their own very special guest, 12 year-old guitarist Alfie Wood joining the band onstage and proving himself to be every bit the performer as the rest of the band, if not every other act on the bill.

Hiding from the gale force winds, we top up on our thrash dosage with Bristolian beasts Voluntas. Sat somewhere between Exodus and early Sepultura, Voluntas are just one of many, many gems gracing the New Blood Stage over the weekend, letting loose something fast, heavy and very, very angry. Injecting just a bit of death metal growling into the mix lends an extra layer of heaviness to Voluntas’ sound that lets it go down beautifully in the tent, letting loose the full force of blistering thrash fun.

More than any other metal subgenre, it can feel like thrash exists in a very specific niche, its innovations largely detracting from the fact the core genre has a very specific sound and feel. But then, if you like that sound, why the hell wouldn’t you back such a set-up? Dust Bolt could easily have been dredged up from a forgotten crevice of 80s thrash, their sound so perfectly catered to that specific era of the sound. But then, if it works for Power Trip, Havok and Ultra-Violence, why not Dust Bolt? Setting out to snap necks with relentless energy and thrashtastic offerings, the band bring the heavy metal party to full swing, their freight-train riffing clattering through the tent with pleasing power. 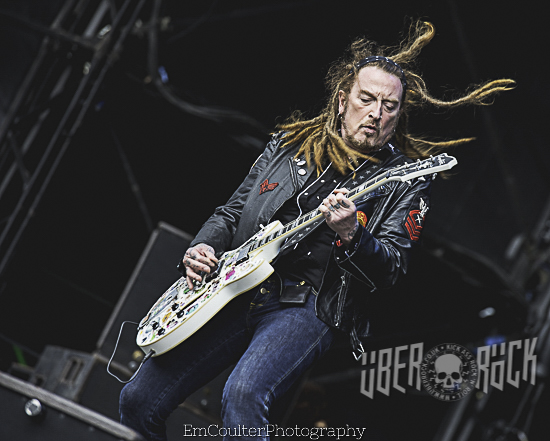 A late addition to the party, online sentiment seemed to flow overwhelmingly in favour of having The Wildhearts join Bloodstock’s 2019 bill. Too punk to be strictly metal, too metal to be strictly punk, The Wildhearts can feel like outcasts no matter what scene they are lumped in with. Only, they never do, always gelling with whoever they play with and proving themselves to be one of Britain’s best – and most underrated – bands in the process. Firing on all cylinders at Bloodstock, the band opt for a largely safe ‘big hits’ set, though still manage to sneak a few great tunes from this year’s ‘Renaissance Men’ into the mix good measure. Unsurprisingly, the band’s heavier efforts like ‘Disconnected’ and ‘Suckerpunch’ go down a storm, while the massive singalongs still prove to be a safe bet in getting voices roaring out over the field.

Back on the Sophie Lancaster stage, Norwegian black metal majesties Helheim are spinning a whole new epic yarn from the black metal genre. Utterly imperious and set against a screen which provides imagery more than enough to complement the dark atmosphere, Helheim feel and sound utterly unconquerable. The epic long-form nature of the band’s songs means they can’t fit a great deal into their set, but the few tunes that do get an airing feel pivotal in communicating just how great this band are live. The band even partake in the perennial festival pastime of inviting guests onto the stage, bringing out black metal legend Hoest to join them for an extra added layer of championship snarling.

With main stage now closed for a few hours and the rest of the day looking to be played by ear, we stick around in the tent for the debut show by 3 Headed Snake. Featuring members of Ministry and Devildriver, 3 Headed Snake have taken the long flight over from LA to deliver some primo heavy metal tunes to the masses. And that’s exactly what you get – songs entirely immersed in heavy metal’s theatricality-obsessed ’80s era, played by a band who has either directly or indirectly experienced the era in question and the heart that pumped behind it all. Between the Geoff Tate vocal stylings of Johnny Ray and the wailing solos of Sin Quirin, 3 Headed Snake know exactly how to flick switches to make fans take not. 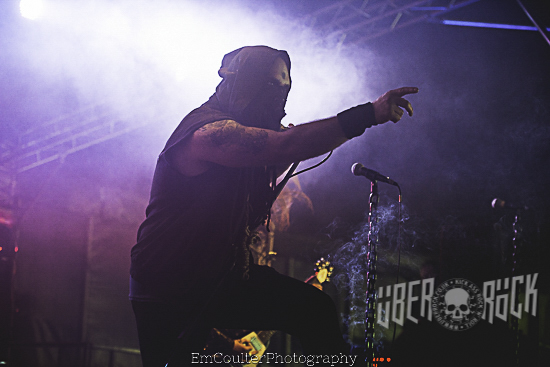 With main stage still down, it feels like a perfect chance to nip back to the tents, so that’s exactly we do to catch Wolverhampton’s own Master’s Call. You know you’re onto a good black metal band when you see Mother Theresa leaving the gig early on. The room fills with the smell of incense as the band take to the stage and the next half hour belongs to them as they let loose grand sounding atmospheric black metal for the masses. 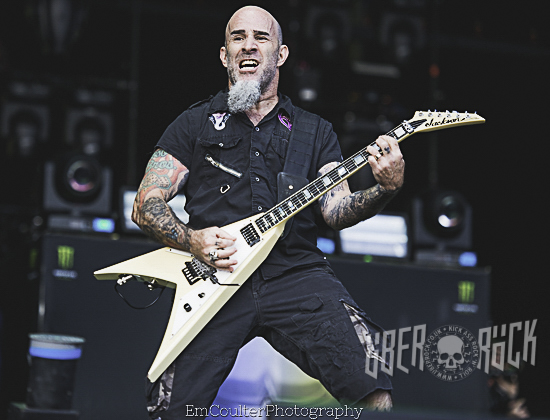 Several hours have passed and finally main stage can re-open as the wind dies down some, meaning Anthrax can still pull out their sub-headline set. One of the more overlooked bands in the thrash pantheon, it is astounding just how little credit Anthrax are given at times considering the sheer number of absolute classics in their repertoire. The band aren’t fucking about tonight, running through the hits with astounding speed and energy, frontman Joey Belladonna serving as ringmaster to a braying metal crowd entirely ready to lose their shit to the likes of ‘Caught in a Mosh’, ‘Got The Time’, ‘Indians’ and ‘Anti-Social’. 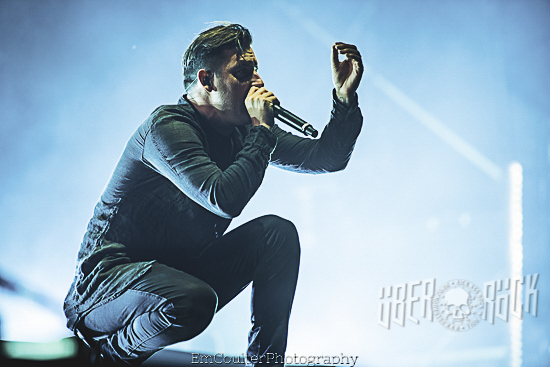 Parkway Drive have taken so much shit for being booked onto Bloodstock that you’d think the festival had gone full pop-punk. Despite being clearly the heaviest of this year’s headliners, nothing short of total domination will do for Parkway at this point, the band having plenty to prove as they hit the stage for their headline set. Explosions, flames and flashing lights are constant from the off, the band pulling no punches in putting on one of the greatest shows around as they hit the stage. Where Sabaton have spectacle, Parkway Drive have spectacle and songs, their set producing some absurdly large singalongs in the process. Hooded figures baring torches signal the arrival of Parkway Drive to the stage, and by the time the explosions have ripped forth the band’s intro to ‘Wishing Wells’ giving way to the first of many utterly unstoppable moments of the set.

Where other bands have found success by diluting their sound, Parkway have simply evolved what they do to a point where it feels like arena metal is back after a 30-ish year absence. Its not enormously surprising that Parkway lean heavily on the explosive, anthemic tracks of last year’s ‘Reverence’, after all these songs are tailor-made to be absolutely roared by a thousands-strong crowd. There isn’t a dull moment in this set, whether that be because Winston McCall is among one of the most physical performers in the business, or simply because the flames and lights go off with such vigour that it feels like the whole field is won over by their energy. 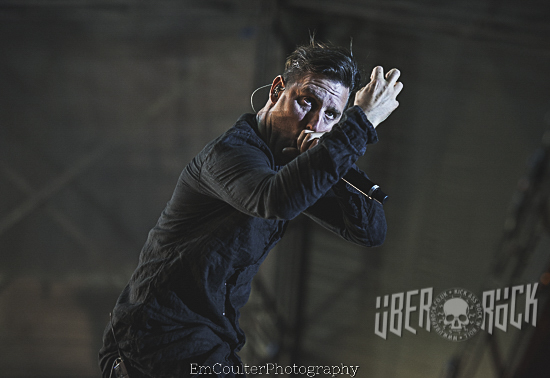 The entire show is a stunning spectacle, from guitarist Luke Kilpatrick playing from a wheelchair (later elevated above the crowd on a riser) to the stunning moment a string quartet is brought down on risers to add a whole new dimension to the track ‘Shadow Boxing’. At one point Winston can be seen holding a flaming Molotov onstage, throwing it so that the stage becomes entirely engulfed in pyro to provide one of the starkest images of the festival. Each of these moments individually feels like a special moment, but together this helps to elevate Parkway’s set above and beyond the usual fare, making it feel like a very special moment in the development of a very special band.