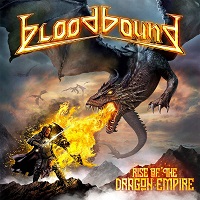 Power metal six-piece Bloodbound are back with their eighth album ‘Rise of the Dragon Empire’. Since the band was formed, Bloodbound have been gaining a large fanbase through their record releases and extensive touring and 2019 sees them taking to the road once again in support of the new record. With previous albums taking influence from the classic metal style then fusing this with a combination of Nordic folk and large-scale orchestral instrumentation. Not to mention the ever-present fantasy element of titles such as ‘Stormborn’ and ‘War of Dragons’.  Bloodbound have been a solid fixture of the Scandinavian power metal genre. With the new album featuring artwork and a title that sounds like it’s straight out of Dungeons and Dragons. I’ve rolled a twenty to find out what’s going on.

The title track kicks things off, and right from the instrumental intro it’s exactly what you’d expect from a power metal band that’s been doing this for a while. A big clear production brings in the full instrumentation of the band accompanied by a wall of orchestral back up. The thick texture has a clear mix enabling all the instruments to have their own space while contributing to the intense sound. The high register vocals of Patrik Selleby soar over the verse sections given a reverb wash to accentuate the grand nature being conveyed by the music. The chorus features a thickened vocal texture as a choir like delivery elevates the lyrics in true power metal fashion. All of the established elements of the genre are on display from the orchestra, fast paced fret running guitar solos and Nordic folk like twinge wrapped in a metal beat all working to paint the fantasy images conjured by the lyrics.

The epic fantasy continues into ‘Slayer of Kings’ and ‘Skyriders and Stormbringers’ the former taking on more of the folk stylings introduced from the album opener combined with choir like vocals for the intro. The tempo of ‘Slayer of Kings’ is rapid with the twin guitars of Tomas Olsson and Henrik Olsson leading the charge and the rhythm section anchoring the music. ‘Skyriders and Stormbringers’ features one of the more epic chorus sections on the album. With a thick vocal texture and key change combined with a dynamic shift, the section is elevated from the rest of the track into a full fist in the air metal moment that will surely go down well on the upcoming tour. This latter track also contains references to ‘Game of Thrones’ mentioning lyrical phrases about a ‘hand of the king’ and ‘seven kingdoms.’ Fans of the fantasy series will notice further nods to ‘Game of Thrones’ in track titles such as ‘Blackwater Bay’, ‘Balerion’ and indeed the whole album concept of dragon empires. These elements add further to the power-metal aspect of Bloodbound and build on the epic fantasy tale nature of the songs contained within the record.

Throughout the album there’s a lot of technical musicianship on offer. As is custom with this type of genre the music has a fast tempo and the musicians of Bloodbound execute the tracks with great ability. Tracks such as ‘Magical Eye’ and ‘Giants of Heaven’ showcase the locked in groove of the rhythm section of Anders Broman (Bass), Daniel Sjögren (Drums) who set the timings and anchor the music with precision allowing the guitars freedom to duel out the solos and the keyboards of Fredrik Bergh to thicken out the texture. The keys make a prominent appearance in ‘Blackwater Bay’ and ‘The Warlock’s Trail’ leading the intro and forming a key root in the guiding melody. All the while the vocals cut through the mix clearly, the higher register setting them apart from the instrumentation.  The melodic delivery of the vocals often acts as a driving counterpoint to the heavy metal of the band, accentuating the classical orchestral elements. All the while the lyrics tell tales of magic, knights, battles and dragons which are complemented at every step by the instrumentation and music.

From the first note the listener is left with little doubt about the type of band Bloodbound are. If one is new to the idea of power metal, then ‘Rise of the Dragon Empire’ will serve as the perfect introduction. To pre-existing fans this record may well represent some of Bloodbound’s best work. ‘Rise of the Dragon Empire’ comes in at just over 45 minutes and during that time there is no let up.  Yes, there’s full on production from textured pads and effect washes. Yes, there’s a shed load of widdly virtuoso guitar solos. Yes, there’s lyrics that sound like they’ve come from a conversation between Dio and George RR Martin. Yet the out and out heavy metal is undeniable, and all those aspects combined is exactly what power-metal is all about. This is a properly enjoyable album. Grab a flagon of mead and turn it up! 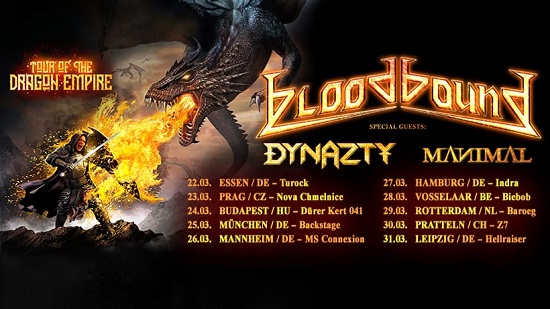