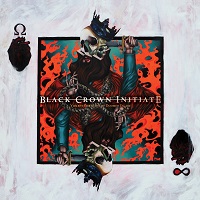 Black Crown Initiate are one of these prog bands that honestly baffles me that they’re not bigger in the UK. In comparison with the sizable following they’ve got in the states, it’s surprising they’re not throwing larger weight around here as they’ve got solid offerings that are reminiscent of some of Opeth’s older material with all their heavy proggy motifs that blend in a bit of death metal. Their third album offering, ‘Violent Portraits of Doomed Escape’ comes in at nine tracks with two appearing to suit “outro” style tracks on a vinyl (‘Bellow’ and ‘He Is The Path’), and is the first album with their new rhythm guitarist Ethan McKenna. I mention this as their second album featured the well-known Wes Hauch on rhythm, so it’ll be interesting to see how the songwriting dynamic changes.

Leading with one of the singles, ‘Invitation’, the mix of acoustic guitar work and death metal growls and stonking heavy riffage, this doesn’t waste any time with getting you straight into the album, the vocals are absolutely filthy set against droney arpeggios with an epic chorus. ‘Son of War’ continues this particular style as it seamlessly moves from one track to the other. So far, the songs are similar in their style of busy, brutal drumming against droney guitar work with the odd bit of chugging.

‘Trauma Bonds’ starts with a combination of guitar effects that you don’t hear all too often with a bit of chorus and phaser, oddly this sort of stuff reminds me a lot of 90s grunge, this doesn’t last too long as it returns to busy chugs and drums but man, I am really digging this uplifting chorus though. Side A finishes with an incredibly intense ‘Years In Frigid Light’ which differs somewhat from the single release, the vocals seem a bit quiet on this one and feel a bit smothered by more droney arpeggios and the chugs and comes off as a bit of a mush of sound in parts which is disappointing. The lead-out of ‘Bellow’ is bloody interesting though if you like a bit of throat singing, which I do, but ultimately feels a bit out of place.

Side B starts with ‘Death Comes in Reverse’ which follows the same sort of pattern as previous tracks with a heavily effects laden standalone guitar riff before the rest comes in. The vocals seem a bit smothered again on this against the rest of the band with a mix of other layered vocals which again make the song come off a bit messy in parts. Another one of the singles they’ve released in the build up to this album ‘Sun of War’, opening with a chilled, atmospheric intro before breaking back into the familiar territory of superfast chugs along with intense double bass pedal work.

The final part of the album wraps up with one of the more recent singles, ‘Holy Silence’, which again starts in a similar manner of guitar playing with a phaser effect to set the riff, it’s a banger of a song though on the whole and has a superb solo towards the end that I could listen to for days. Finally, ‘He is The Path’ to wrap Side B up, a nice short piano outro to finish.

On the whole, I can’t say I really enjoyed this album, there’s a couple of good songs on there that have some really superb parts but it came off as quite samey throughout and wasn’t particularly engaging, which is disappointing because I quite like Black Crown Initiate but this album feels a bit prog by numbers.