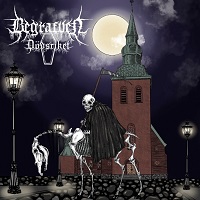 Seven years in the making, ‘Dödsriket’ is the debut release for Swedish black metal duo Begrafven. With concepts formed with a previous demo, the sum of the ten tracks present had been delayed by line up changes and other reasons until recording in 2017. Now, at last, the duo is able to capitalise on the original two track demo release that sparked the whole project. From the opening track of ‘Nyckeln’ till ‘Dödsriket’ itself, it’s clear that this album is intended to make a statement.

On first run through, Begrafven have delivered a sledgehammer of thrashy black metal power. With an intensity of riffs and pounding rhythms to rival that of anything the genre has produced. While the swirling aggressive nature of the sound is undeniable and the main focus of the music. There are a number of subtleties that lie within the tracks that helps to separate what the duo have recorded from the main body of the genre.

Tracks like the album opener, ‘Frostfödd’, the epic ‘Då Jorden Fylls av Klagorop’ and ‘I Mitt Mörker’ all stand as prime examples of how Begrafven are looking to offer up something different.  While the main stylistic elements of BM are all present and correct and executed with balance of precision and passion, there is also the blending of thrash and more traditional metal refrains that when worked into the punishing riffs and rhythms produces a more accessible sound. The breakdowns too take inspiration from prog as much as traditional black metal allowing the song writing to weave other themes into the music.

One of the highlights of the album is ‘Universums Grav’ one of the tracks from the original demo. It sets off on a standard black metal path with guitars and rhythm section providing a furious backdrop to the guttural vocals. The atmospheric texture is generated by a wash of reverb and then the track opens out. Riffs and melody lines counter each other driving the movement of the music. All the while the bass and drums relentlessly lay down a groove that is the heart and foundation of the track. As it progresses to the breakdown section, the riffs and tremolo picked melody lines continue to work at pushing the track creating a highly engaging interplay. This type of structuring and technique is laced throughout the whole album, but ‘Universums Grav’ really showcases it. The musicianship is on top form. The guitar driven breakdown generates a new layer to the track but does not deviate from the themes laid out in the intro, it builds on similar ideas progressing the melody while the bassline adds an extra element of sonic interest.

In terms of mixing, ‘Dödsriket’ hits the nail on the head. The mix balances all the elements available allowing for the themes and style of the song writing to be put across while also enabling the instrumentation to be clearly picked out. It unifies the sound of the album without distorting or losing quality. This would no doubt potentially upset some purists of the genre, given how the mixes of much black metal sound purposefully rawer to heighten the intensity of the compositions. Controversially, my opinion is that many mixes in black metal are often garbage. The term raw is often bandied about when really people mean bloody awful.  Happy to say this is not the case with this album. Here is an example of how a good mix works with the musical delivery to accentuate the power and intensity of the music without needing to be below par. Nor does it detract from the stylistic authenticity of the genre.

‘Dödsriket’ offers up a lot to take in over the course of ten tracks. With the run time of 69 minutes it’s worth setting aside time to get into it and you will be rewarded. There are different bits to grab interest and no two tracks sound the same giving the album a sense of growth as it progresses. For those new to the genre the fact that there’s other stylistic metal elements coupled with the mix should make it quite accessible. For seasoned black metal fans Begrafven have offered up something different from the norm that should entice you in.