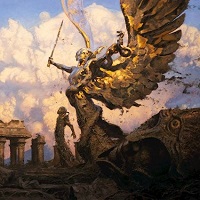 New Zealand based four-piece Beastwars formed in 2007. They released their self-titled debut album in 2011 to widespread critical acclaim. In doing so, they brought about a new look to the country’s metal output and made fans sit up and take notice of what was going on in the southern hemisphere. Two more albums followed, 2013’s ‘Blood Becomes Fire’ and 2016’s ‘The Death of all Things’. It was at this time that vocalist Matt Hyde under went six months treatment for Non-Hodgkin Lymphoma. ‘IV’ now represents not only a new release for the band but a return of a metal heavy weight. Hyde has confirmed that he is now in remission and that the new record represents a creative outlet for the dark times that he faced.

First up is ‘Raise the Sword’, a wash of overdriven feedback brings in the full band. A doom like guitar riff is coupled with a pounding drum and bass groove that immediately creates a dark depth to the music. This overtone of melancholy is added to with the angst-ridden vocal delivery. With added reverb to the mix, the vocals cut through the thick texture and provide a sense of space. The initial groove remains a constant throughout, but a shift in dynamics allows for the music to progress and develop on the doom like soundscape into a slow burning foot stomper. ‘Wolves and Prey’ follows up the opening track and retains the initial doom drenched feel to the sweeping soundscape. However, it picks up the tempo significantly allowing for it to create a more aggressive groove. The heavy riffs, driving rhythm and tortured vocal delivery remain, but there is more attack to the track than the opener.

The more aggressive side of Beastwars builds into tracks like ‘Storms of Mars’, current single ‘Omens’ and ‘Sound of The Grave’. All of these tracks feature a harder attack from the rhythm section coupled with more frantic guitar work. The ever-present vocal stylings tend not to shift too far from the established aggression already displayed and with the addition of the reverb, they cut through the swirling tempest created by the instrumentation. ‘Storms of Mars’ feature a slight variation on the guitar techniques with additional tremolo picking to the key riffs as well as the downstroke power chords that have come before. This creates a more furious nature to the riff delivery and serves to heighten the tension of the track as well as propel the rhythm. An addition of the wah-pedal to the solo mixes perfectly with the chaotic swirl of the rhythmic texture and serves to elevate this track to a standout moment on the album. ‘Omens’ works as a great lead single as it sees the band harness their doom-laden groove to its full potential. The colossal sounding guitars accompany the pounding rhythm section for the intro building a swirling texture upon which the vocals cut through. The instrumentation backs down for the verse like sections and continue to dynamically shift in accordance with the tortured sounding vocals. There’s power to the band’s delivery that sounds as if its barley restrained as all of the instruments fight to complete the tempestuous wall of sound. However, it does not come across as muddy or confusing as each instrument and movement is able to be identified. Like the rest of the album, the production and mixing allow for clarity within the chaos and keeps the music audible even through the sonic maelstrom.

To someone unaccustomed to this style of music, the sound may at times feel slow or possibly ponderous in its movement. It is possible to suggest that the tracks tend to blend into one another and that a lack of diversity diminishes the sonic interest. However, each track is well structured and the musicianship allows for the riffs and rhythms to be executed to a high standard. This allows for the listener to differentiate the various movements and shifts within each track as well as the album as a whole as it progresses. There is a lot going on in the album, there is a lot of heavy doom like sound created throughout the tracks, but there are also more experimental aspects. Tracks like ‘This Mortal Decay’ and album closer ‘Like Dried Blood’ build on the themes that the band have already displayed both musically and lyrically and change things up to deliver something extra to standout out from the other tracks. Both fit clearly with what has been created as a whole but ‘This Mortal Decay’ mixes in some more straight forward Heavy Metal with their sound and creates a catchy foot stomping number for the album. ‘Like Dried Blood’ throws a piano into the mix and strips down the thick texture that has been present so far. The result is a track that feels more reflective in its soundscape. The initial half of the track is predominantly vocals and piano with the remaining instrumentation thickening out the background texture. However, the latter half removes the piano dominance and the full band backs the emotive vocals. The dynamic shift created by this propels the track onwards to a climactic crescendo to close the album.

Overall ‘IV’ represents an excellent return for Beastwars. Over the course of eight tracks we are seeing a band getting back together and doing what they love to do. Furthermore, it represents a sonic outlet for Hyde as is clearly heard within the delivery and content of his vocals. Yet it’s not solely about him, his experiences are the creative catalyst, but the resulting sound is that of a band coming through a dark time and hungry to make a return statement. To that end it’s a resounding success.