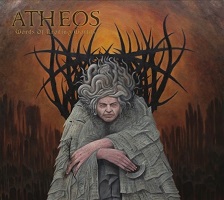 It’s been seven years since five-piece Atheos released their debut album. They’ve since then been bringing together inspiration from their native Ireland, drawing upon elements of mythology and landscape to develop latest album ‘Words of Eroding Worlds’. Seeking to deliver their own take on the traditional death metal sound with big riffs, hard hitting drums and gutturals telling of dark folklore and ancient mysticism. Does the long-awaited album two deliver?

Opening with ‘Morte Sumus’ it’s clear to hear what Atheos are looking to achieve. There’s an atmospheric build up, effects and string pads are layered building a swirling intro before the crunching guitars and attacking rhythm section kick in combining to create a heavy weight introduction to the album. The vocals mix a combination of traditional death gutturals and throat singing technique that provides a twist from the genre norm and heightens the darker atmosphere of the music. It’s a hook to draw the listener in and leads well into ‘Become Dust, Colossus’. ‘…Colossus’ builds on the themes introduced in the opener but leans more on the guitars as the driving force offering up more attacking riffs and slick lead lines that push the melody to the fore. It doesn’t get too melodic though, there’s more put into the riffs and rhythmic groove to keep the listeners attention with the interplay of guitars, bass and drums creating the crushing foundation and the vocals topping it off to deliver a crushing standout of the album.

As the album progresses it offers up other highlights in the form of ‘Parchminer’ with well-constructed hooks in the riffs and aggressive vocals matching the powerful blast beats. ‘Smashing the Antler Throne’ is a slow building, brooding stomper. Taking on a doomier edge to the death metal sound of Atheos and as it grows it offers up a solid blend of pounding beats and crushing riffs that develop into some excellent lead work towards the close.

As I say there are several good high points that offer much to the listener. Atheos have certainly got a handle on the death metal foundations that has allowed them to develop their own identity and offer something a little different yet still faithful to the genre. However, with the exception of ‘Smashing the Antler Throne’, the latter half of the album seems to run out of steam. The riffs and rhythms are a little more ponderous and while they still sound towering and heavy, the pull of the opening tracks has worn off. ‘The Hollow Stone’ twists and turns in its structure and loses its direction. This is a shame as there are some very punchy riffs that get overshadowed by too much going on around them and the whole track feels a bit forgettable by the end. Closing track ‘Oceans and Flame’ follows in a similar vein and feels rather disjointed when compared to the strong opener that the album had.

Mix wise, the delivery of the music is excellent. It’s a full bodied, weighty sound that enables each layer of the song writing to be clearly heard and enables the definition of the instruments. It gives the album a unified sound and enables the music to come through with a punch. Overall, there’s some solid death metal contained within ‘Words of Eroding Worlds’. The musicianship is excellent and Atheos have an undeniable strength in delivering a powerful sound in the genre. It’s just a shame that the album fizzles out towards the end and perhaps leaves the listener a little cold.