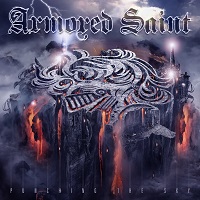 If you were asked to compile a list of, say, the dozen most revered bands in the history of American heavy metal, I think there would be no doubt that the name Armored Saint would feature pretty close to the top. While not the most prolific of bands – this is only their eighth studio album in their 38-year career – each release has always been something of an event in itself, eagerly anticipated by their legions of diehard, extremely loyal fans the length and breadth of the Überverse: and, it has to be said that ‘Punching The Sky’, their first new material in five years and an album more than two years in its creation and development, is most certainly no exception.

While many of their contemporaries in Los Angeles were following the thrash trend and jumping on that latest metallic bandwagon, Armored Saint crafted a sound that these days perhaps would be categorized as NWoTHM, or even NWoUSHM, forging a path that could be seen as the first steps towards the development of the power metal sound that we know and recognize today. While in some ways that they subsequently got left behind as the likes of Iced Earth, Savatage and Symphony X took advantage of the genre’s increasing popularity (and accompanying technical advances), a position not helped by the band’s lengthy hiatus in the mid- to late-Nineties, the Saints have always stuck to their guns and continued to plough their own furrow.

As if to emphasize that they are very much a band who plough their own furrow, where many bands would hit us straight between the eyes, the Saints ease us in gently, with the skirl of Uilleann pipes easing into the album’s longest song’ Standing On The Shoulders Of Giants’ (the chorus of which also provides us with the album title): I told you AS always have done things their own way, while at the same time not fucking with the basic underlying formula. And that is exemplified throughout the album, as the quintet provide us with a collection of unremittingly great heavy metal, from the sub-thrash groove ‘End Of The Attention Span’ through the anthemics of ‘Missile To Gun’ and ‘Bark No Bite’ to the slow burning majesty and pathos of ’Unfair’ and the thunderous majesty of closer ‘Never You Fret’, the vibe of which brings the album virtually full circle, especially with the use of an American Indian flute (as played by drummer Gonzo Sandoval) in the intro.

As you would expect, the songs are individually and collectively brilliantly crafted, and the musical performances are precise and measured, yet abundant in the energy which the band still clearly possess, while the album has a considered flow which helps lure the listener deeper and deeper into its presentation.

I’ve said this many times in the past, and no doubt (hopefully) will find myself repeating this again and again in the future, but the so-called “old guard” of the metal elite are consistently proving themselves to be strong, relevant forces in the musical Überverse, continually showing the young upstarts how things should be done. With ‘Punching The Sky’, Armored Saint prove that they are another band not prepared to abdicate their thrones any time soon, but for them the sky most definitely is not the limit