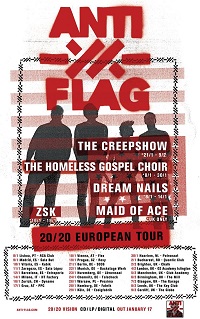 Pittsburgh political punks Anti Flag are back in the UK and it was up to me to traverse the Lancashire divide across to Manchester to catch the brothers at arms play in second home Manchester Academy for the first time, with a double support bill of The Creepshow and Maid Of Ace. Doors open 30 minutes late, which bodes badly for getting home and subsequent long-distance travel to the next day’s live music shenanigans.

There quite a few in for Maid Of Ace starting their set and it’s a loud, in your face introduction to their music as they get straight down to work with a Distillers meets old school punk rock approach to their music. Even by the time they kick into the second song, the signs of people starting to move to them are there, signs which only increase as they work further into their set, with old school Hardcore style vocals working well for most of the people around me in the venue. The room continues to fill and they clearly work well for us all even for those just coming in from the cold, uninitiated to their stylings so it’s very much a very appreciable opening set for the British act.

Montreal psychobilly punks The Creepshow have been around for over a decade and this shines through in their approach, with the busy room immediately getting caught up in the spirit of things.

Well, it’s kind of hard not to  when the second track is renamed by The Reverend McGinty to ‘Boris Johnson Is A Fucking Twat Who Can Suck My Cock With A Cornish Pasty’, though I may have missed a little bit of the name and we do have a pretty left wing crowd in for our headliner!

Kenda’s clean vocals work exceptionally well with the psychobilly side to their music, with some pretty on the ball vocal harmonies from McGinty and Sickboy supporting, whilst the blend of the harder Punk edge brings in that something that some psycho/rockabilly acts sometimes miss. A good spirited mosh pit kicks off in the third song, showing how well The Creepshow are coming across, with the diminutive Kenda producing such noise and demands for more energy that I’m put in mind of a punk Ronnie James Dio – high praise indeed! Their energy seeps into the crowd as they continue through their set, getting into it themselves with a clear camaraderie that is great to see. We even get Kenda walking into the middle of the mosh pit herself, demanding people circle pit around her, as well as a wall of death, which goes down very well. A fantastic set that ensures we are all primed for our headliners.

Coming on stage at the end of The Ramones’ ‘Blitzkrieg Bop’, Anti-Flag launch straight into their opening two songs with a sudden increase of energy from the crowd, the mosh-cum-pogo pit opening straight up, before Justin Sane makes clear their anti-fascist beliefs, along with the warning the he wants no sexism, racism, ableism or the likes tonight – perfectly alright by myself and everyone around me! The atmosphere almost resonates with the sheer energy going on in the room, from band and audience alike around me, the sheer positivity almost as obvious across everywhere too. The pace is relentless without even the chance to take a breath between songs most of the time, yet none of the energy levels drop, which is a testament to how much both sides of the stage barrier are bouncing off each other.

Kicking off the set with ‘Christian Nationalist’ and ‘Turncoat’, the crowd are smack back into the mood, screaming along with the band from the very beginning of the set, while after a short speech from bassist Chris we get anthem ‘Unbreakable’, which cuts down on the pit action but increases the shouting along – I guess even those half my age in the pit need some sort of break at some point!

The set winds on, with the band encouraging further circle pits and the like – with the proviso of looking after each other and picking each other up, as is fully the spirit of the night – before the likes of ‘Fuck Police Brutality’ brings the energy levels right back up as they start to drop most of the way into the set. The almost non-stop passion and fire has to give way at some point and it kind of does as ‘1 Trillion Dollar$’ starts off slowly, everyone singing along to the chorus.

A fantastic evening of punk, inclusivity and outright passion and love.