Anoxia – ‘To The Lions’ (Mighty Music) 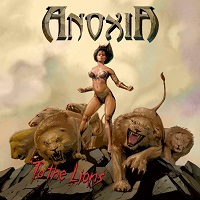 Having received much critical praise for debut LP ‘A Lap Dance For The Devil’, Anoxia have returned with nine fresh tracks for ‘To the Lions’. Between releases the band have been both working on the new material and spending time on the road promoting their sound and building a steady fanbase. They’ve made their name on the Danish underground scene before pushing themselves further, bringing forward a traditional metal sound with a modern twist. Relying heavily on catchy riffs and a driving melodic edge, Anoxia are looking to take another boost upwards, does the new LP deliver?

With a combined staccato attack of guitars and drums, the album kicks off with ‘Origin of Pain.’ After the stop start intro, the track opens into a headbanging friendly melody driven rocker. The riffs are big and catchy, the rhythm section locks in tight to provide a pounding driving force and the vocals cut through with clarity. There’s a lot of traditional metal sound that pulls the listener in with the vocals taking on a higher register, the guitar licks being both catchy and aggressive yet the aforementioned driving rhythm adds in a thrash like edge. As an opening statement, ‘Origin of Pain’ works excellently to grab attention and open up the rest of the album.  Without pause for breath, ‘Scaffold’ charges in with hard hitting guitars and once again the rhythm section providing a rapid-fire thrash style. When the vocals kick in the backing guitar work ups the pace with tremolo picked rhythm lines matching the attack of the drums. When given the space to cut loose, the guitar lead work takes charge and puts the listener in mind of early Metallica with a furious approach to the solo style. It’s another heavy weight number that highlights the straight down the line heavy metal approach of Anoxia.

The title track continues on with the no nonsense approach to metal now firmly established in the album. However, with the chorus sections featuring an additional reverb wash on the vocals and the melody lines lifting further, there’s a solid anthemic quality to the track. The riffs still combine with the bass and drums to give an unstoppable, chugging feel to the music, however there is a more pronounced sing-along nature to the vocals that should mean this track will score highly with a live crowd. It certainly continues to keep the album moving.  ‘These Chains’ features some of the catchiest guitar melody work on the album. Right from the introduction there is a key hook line that is repeated throughout the track that hooks the listener into the driving melody and cuts through the ever-present powerful rhythm section.  The anthemic qualities of the previous track are repeated within ‘These Chains’, although not quite to the same extent as there is more focus on the heavier side of the sound.

As the album moves into its latter half, tracks like ‘Rule the Storm’, ‘Devils Share’ and ‘Bite the Darkness’ all continue on with the heaviest side of Anoxia’s sound. Incorporating the established elements of traditional metal, thrash and a modern twist that is entirely their own in order to create a second half that remains as fresh and engaging as the opening half.  The dynamics only shift slightly allowing for a relentless wall of sound to power through without shifting gears, it retains a sense of driving attack, however it does not stagnate as the musicianship and song writing abilities of the band shine through and retain the interest of the listener. Two of the stand out moments of the second half of the album come from ‘Slavery’ and album closer ‘In Eternity’.  The former track features acoustic guitar accompanying a well-crafted overdriven lead guitar for the intro that instantly captivates the listener. The track opens out into a full-bodied heavy hitting number and proceeds to build on the metal themes of the band. For the outro, the acoustic and lead guitar are reused with the lead guitar melody bringing the track full circle to it’s close. ‘In Eternity’ is the longest track on the record and brings in some of the strongest melodic elements of Anoxia’s sound. With the mix lending an epic edge to the music and the well-crafted dynamics shifting to allow for a flow to accentuate this. The track rises and falls throughout, continuously building. The breakdown strips the wall of sound back to a single acoustic guitar allowing the track to rebuild and grow into a final epic sounding thrash-based attack leading to the fade out.

There’s a lot to enjoy with ‘To the Lions’. Anoxia have encapsulated a high energy driven metal sound that takes inspiration from various elements yet allows room for a unique twist. It’s an album that will not only sit well with pre-existing fans but should stand as a gateway for new listeners. For fans of metal as a whole, there’s something for everyone to find within the various influences. From a critical point of view some may say that while there is undoubted energy and aggression within the tracks, the length of the tracks may lead them to come across as slightly over worked and that a shorter track length would at times work better allowing for a harder hitting punch. However, each track does allow for the song-writing and musicianship to be clearly highlighted and allow space for the music to flow rather than feeling rushed. Also, the music doesn’t feel long, as the band have harnessed a straightforward high energy metal sound, the music retains great interest and remains fresh with every track.