ALBUM NEWS: Mayhem to unleash their ‘Daemon’ in October. 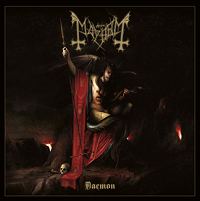 Speaking about the new album, guitarist/songwriter Teloch (aka Morten Bergeton Iversen) told us:

“I think this album will be most pleasing for old and new fans. As most of our devoted fans know, Mayhem has never released two albums that sound the same. That’s the case this time around as well. As I said, we simplified stuff, but at the same time tried out some new stuff to keep it interesting for ourselves and, also for our fans that dig that we are doing something new on each album.”

Looking back at the band’s history, he added:

“Mayhem will always be Mayhem. If we put the genre game aside a bit, no one else sounds like Mayhem. Even when ‘De Mysteriis’ came out, it was not at first considered to be a black metal album, if my memory serves me right. Tricky to label this band. Metal would be the most fitting; it’s not pure black metal, in my opinion. Not sure it has ever been actually, despite what the general opinion is. People can call it whatever they want. If it’s black metal to them, then fine. We don’t really care. To me, it’s important to keep some sort of black metal vibe at least.”

Mayhem will follow the release of ‘Daemon’ with a European tour, with special guests Gaahl’s WYRD and Gost, which will include the following dates in November: