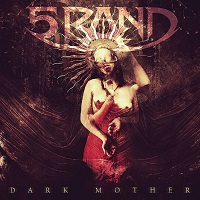 Hailing from Rome, four-piece 5Rand formed in the latter part of 2015. Having made an immediate impression with their modern twist on heavy metal combining crushing riffs, powerful guttural vocals courtesy of Julia Elenoir mixed with driving melodies. Their darkly rich atmospheric sound was first heard on the debut recording ‘Sacred/Scared’ alongside this they’ve toured with numerous bands including Cradle of Filth, Behemoth and Dark Tranquillity. Since their initial release and hard work touring, 5Rand have gained popular attention. Now 2019 sees their second album brought forward, how have 5rand developed and what do they have to offer with ‘Dark Mother’?

Opening with ‘Collapsing Theory’ with an atmospheric build up based around sound effects and samples. ‘Dark Mother’ starts off proper with ‘Embrace the Fury’. A well titled track as it kicks off almost immediately with a rapid, aggressive guitar riff, pounding rhythm section and dominating guttural vocals. When the chorus opens up and the music lifts into a well crafted and catchy melodic drive, it’s a track that showcases the 5Rand sound style and makes for a great introduction. As the album progresses the listener is reintroduced to the elements heard in ‘Embrace the Fury’. The guitar work of Pierluigi Carocci is both aggressive and technical delivering rapid fire riff work and searing lead lines that work well with the vocal melodies. The rhythm section offers up an extra edge of brutality with blast beats aplenty courtesy of Andrea De Carolis whose punishing attacking drive features well on ‘The Awakening’ and groove-based rhythm technique on ‘Cold Deception’. All the while the bass guitar of Riccardo Zito locks in the foundation and thickens out the lower end of the texture upon which everything else is built.

With the thick texture of the instrumentation forming the bed rock for the colossal sound of 5rand, it is the vocal delivery of Elenoir that provides an extra edge to the sound and gives the 5rand style not only a darker quality but also emphasises the crushing power of the band. Her guttural delivery could be easily compared to any of the best in the metal scene currently. However, there is an extra emotive spark that comes through giving her style a more anguished edge that works perfectly with the atmospheric darkness created by the music. One only needs to listen to ‘Feel the End’ to get a flavour of the emotional rawness that her voice is capable of. Across each track the sledgehammer delivery of the gutturals is matched only by the clear, melodic juxtaposition that she creates on the chorus and break sections within tracks. Current single ‘Old Angel Midnight’ is a clear highlighter of not only Elenoir’s excellent vocal stylings but also how it all fits together with the band as a whole. A clear choice as a single as it showcases the band firing on all cylinders and providing a standout moment on the album.

From ‘Embrace the Fury’ through the next eight tracks, there is no let up from the technically accomplished, powerfully heavy sound of 5Rand. They mix an excellent blend of full on crushing heaviness with clear melodic drive and harmonies that creates a highly engaging sound. Respite from the sonic attack comes in the form of album closer ‘Silent Spring’. There is still a mix of their by now distinctive blend of metal led by the dominant vocals, however, the over all sound and delivery creates a more reflective mood enabled by the more prominent melody drive and the instrumentation serving to drive this aspect of the song rather than deliver the hammer and anvil heaviness found else where on the record. It’s a soothing end to a punishing, yet enjoyable album.

There’s a lot to enjoy within the tracks of ‘Dark Mother’. Each of the musicians brings undisputed talent to the bands overall sound and delivers excellent command of their instrument, whether that’s the attacking and engaging guitar work, powerful drumming, locked in bass groove or crushing vocals. The mix allows for everything to work together yet space is provided for everyone to be identified. The song writing and structures are a little formulaic at times allowing for the listener to predict where certain breaks and key changes will fall, however this does not detract from the enjoyment of the music in any way. The songs are crafted well enough to enable the music to be the driving force and maximise the listening enjoyment.