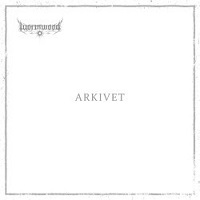 I came across Wormwood after reviewing the re-issue of ‘Ghostlands – Wounds from a Bleeding Earth’ and was immediately hooked on their blend of melodic black metal. It captures a raw intensity along with well-crafted songs, great musicianship and production that elevates the sound above their peers.  The previous album to this latest offering, ‘Nattarvet’, received critical acclaim and not only earned them an extended global fanbase, but also helped cement Wormwood’s place amongst Sweden’s hotly contested metal elite.  Their new full-length ‘Arkivet’, meaning ‘The Archive’, (it was originally entitled ‘Vita Arkivet’ however a legal dispute with a Swedish funeral home led to the change), sees the band taking on dystopian themes. A blend of lyrics on the demise of mankind with bold and powerful black metal rhythms and evocative melodies.

Title track and recently released single ‘The Archive’, kicks things off for us.  Launching straight into blast beats, tremolo lead lines and guttural vocals.  Wormwood quickly establish that they have no intention of shrugging off their black metal core. However, for all the intensity of the opening bars, the track opens out to include catchy melody and hook lines.  Pulling everything together is the mix allowing space for everything put projecting all the elements into a cohesive wall of sound.  The result is a track that delivers a sonic sledgehammer of an opening. Yet it retains the intricate melodies and compositional elements that has so far earned the band a wide-ranging following. Lyrically, the subject matter for the album is laid out for us.  A bleak reflection of humanities time on an Earth now lost to them, a catastrophe of man’s making has led to an apocalyptic event ending life as we know it.  This is our core concept for the album and each track from here relates to various takes on this premise.

Given numerous playthroughs, the whole album works so well as a single entity with each track feeding into another and themes built upon and developed. Due to this, it’s not necessarily an album that has singular standout moments like Wormwood’s previous releases.  However, ‘Overgrowth’ and ‘My Northern Heart’ are tracks that I find myself looking forward to with each play. The former, incorporates a more mid-tempo pace and overall stance than the frantic opener. Due to this, it’s arguably the most headbanger friendly on ‘Arkivet’ and offers up some of the best riffs.  As it flows the dynamics alter allowing for the composition to shift and grow until the guitar solo kicks in providing a peak.  The latter incorporates some of the traditional folk elements that Wormwood have in their compositional arsenal.  These elements have bled through on their previous releases, but here they are combined further with some of the catchiest hooks and melody devices on ‘Arkivet’. The chorus sections in particular sound huge with the layered backing vocals and sweeping production lifting the sound.  Lyrically it appears as a homage to the northern expanses of Sweden but it does fit in within the overall concept of the album really well.  The resulting piece is a track that features a grandiose melancholy that will have anyone reaching for the replay button.

Throughout the album, there are further highlights, more folk infused touches on the likes of ‘Ensamheten’ that helps to both break up the intensity of the black metal edge but also accentuate the power of the lyrics being sung in Swedish. Once again, the flow of the melody and rhythms drives a track that is both powerful and catchy.  From their previous albums, Wormwood have also been comfortable adding prog elements to their music. Pink Floyd esque guitar work marked out memorable moments on both ‘Ghostlands…’ and ‘Nattarvet’.  This is something that they’ve also included on the new album and with great effect.

Throughout the tracks mentioned as well as the record as whole, the guitar lead lines are the key to the hooks and the melodic lines that elevate the emotive passion of the lyrics while the heavy weight rhythm section pushes the raw aggression. Closer ‘The Gentle Touch of Humanity’ features fine guitar work and Gilmour like note bending that serves to bolster the musical themes. It is perhaps not the same calibre of album closer like the ‘The Isolationist’ is to the previous album.  However, it is a great track in its own right. Crafted with the rise and fall of dynamics and the balance between aggressive black metal and sweeping melody led metal that Wormwood have established. The inclusion of news samples at the mid-point serves as a good way to shift the dynamic range as well as accentuate the message of the album. It’s an ideal way to end this album wrapping up the concept in a package of fine musicianship and excellent melodic metal.

What Wormwood have delivered here is a well-developed, well executed slice of melodic black metal.  They produce outstanding moments of raw passion and intensity that one would expect from the genre that is married to finely honed melody lines and at times, harrowing lyrics.  The result is an album that offers something for everyone while undeniably highlighting that Wormwood are a band that should soon be making a bigger name for themselves. With ‘Arkivet’, the demise of humanity never had a better soundtrack.