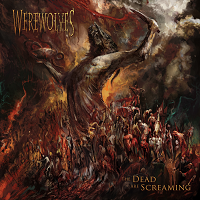 Described in their press release as “a supergroup of sorts, who would no doubt argue that there’s rarely anything super about them”, Werewolves came about as a result of one of those “let’s form a band” conversations between drummer Dave Haley (of Psycroptic, Ruins and King) and The Berzerker/The Antichrist Imperium guitarist Matt Wilcock. From there, things moved quickly – very quickly indeed. Within two days, Wilcock’s band mate Sam Bean was on board, and three weeks later this, the new project’s debut album was written, recorded, mixed and ready to go… all it needed was a record company to get out it out there. Another couple of weeks later, they inked a three-album deal with Prosthetic Records – et voila… two months from beginning to end… None of the long, detailed production schedules the trio were used to with their other bands, just something more in keeping with their collective desire to create “something nimble and idiotic… blackened caveman death-metal without any pretension whatsoever…”

With its nine tracks clocking in at a seemingly meagre 33 minutes, ‘The Dead Are Screaming’ delivers exactly what its creators set out to do. It is raw, uncompromising blackened DM which eschews all sense of decency or nicety – or even needlessly OTT technicality – but rather concentrates in snapping as many of your neck muscles as possible as quickly and efficiently as possible. It is an album of pent-up fury and aggression, unleashed in a barrage of blast beats and death growls that are both positively evil in their intent and impact.

Bean’s distinctive vocals inevitably draw comparison to, particularly, The Berzerker, but that is as unavoidable as it is an appropriate starting point. But Werewolves are an entirely different, and distinct, entity: more vomit and piss than spit and polish – something evinced no better than on the epic, and highly appropriately titled ‘Fountains Of Bile’ (I say epic because it is the longest song on the album and only one of two to break the four minute barrier), which spews from the speakers in an avalanche of vitriol and diseased intensity.

To coin the language of the cool kids, ‘The Dead Are Screaming’ is sick as fuck. A blistering behemoth of an album that delivers on every level and have even the most cynical and hard-hearted of DM fans basking in the beauty of its brutality. Definitely, and defiantly, one of the hardest hitting examples of the genre you will hear this year.