Visions of Atlantis – ‘A Symphonic Journey to Remember’ (Napalm Records) 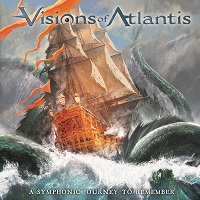 There’s been a bit of a string of high-profile live album releases in recent weeks which has been a bit of a bittersweet experience. While it’s great to be able to relive the live experience, it sure does make you long for that feeling of being back amongst the crowd. But alas, for now this is all we’ve got so we’d better make the most of it! This live release from Visions of Atlantis promises to be something a little bit special as well, so I guess I’d better let myself get taken along with this “Journey to Remember”.

Now if Visions of Atlantis’ flavour of metal wasn’t symphonic enough for you, they’ve got you covered by enlisting the support of the Bohemian Symphonic Orchestra from Prague for this performance. So I guess you could say that we’ve got Symphonic symphonic metal here! Recorded at Bang Your Head Festival (Germany), this was a pretty big event for Visions of Atlantis. Not only was it the very first time that the band had realized their dream of turning their symphonic experience up to 11, but it was also an opportunity to show off some tracks from the (now released) new album, ‘Wanderers’. Certainly, plenty to be excited about here, and it’s clear that isn’t going to be your run of the mill live album.

‘A Symphonic Journey to Remember’ will be available on CD and Vinyl as well as Blu-Ray/DVD for the full visual experience, and it’s the latter I’ve managed to get my hands on for this review so I can tell you all about the full experience! It’s a very multicultural affair, with representation from Austria, Italy, France and the Czech Republic, and all of this combined lends itself to a seriously rich experience. From the outset, it’s clear that Visions of Atlantis have a close bond with strong chemistry between the two vocalists shining through. There’s plenty of fire and you can tell that the whole band is playing at the top of their game for this performance in order to make it pretty memorable. It’s almost as if they had an album title for that.

The show gets off to a very dramatic start with the orchestra leading the way to build up the atmosphere before the rest of the band hit the stage to start the proceedings with ‘The Deep and the Dark’ from the album of the same name. This is arguably one of the bands’ more popular tracks and the addition of the orchestra takes this already decent song and transforms it into something spectacular. For the crowd that had gathered for this show, it must have been one hell of a surprise that Visions of Atlantis had pulled out all the stops for their set!

It’s a bit of a step back through time after this as the band waste no time moving onto ‘New Dawn’ from 2011’s ‘Delta’ album.  But things get even more nostalgic a couple of songs later when they delve deep into their back-catalogue to bring out ‘Lost’ which turns 16 years old this year! However, it’s the song after this that blew me away… For ‘The Last Home’, the band leave the stage so that only vocalist Clémentine remains in front of the orchestra. The result is an incredibly moving vocal driven piece with a gentle piano melody (and the backing of the orchestra) which builds up into a powerful crescendo when the rest of the band return to the stage to see out the last part of the song.

‘Release My Symphony’ is the first of the “new” songs to find its way into the set, but more exciting for me is the inclusion of ‘Heroes of the Dawn’ which sounds even better backed by the live orchestra, with the whistle in particular standing out amongst the other instruments. The ‘Wanderers’ album is definitely well presented in this set which is a bold move considering that the album hadn’t been released when this show was recorded but it paid off with strong reception from the crowd!

As the title suggests, this really was a ‘Symphonic Journey to Remember’ and it has fallen at just the right time as it was only recently that I said the more bands should perform live shows with an orchestra! The quality of the video of this performance makes it well worth splashing out on the Bluray/DVD version of this too so that you can be completely immersed in the experience. The audio-only version is pretty good as a standalone, but it’s like being in the pub and ordering tap water when you could have a beer, it’s worth going for the whole thing. During this drought of live music, ‘A Symphonic Journey to Remember’ helped fill that void in my life and I can safely say that I’m now a Visions of Atlantis convert after having only flirted with their music up until now!