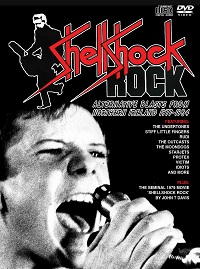 I’ve written several times in these pages of the unifying force which music had in the Troubles-ravaged Northern Ireland of the late Seventies and early Eighties, helping to bring together teenagers from opposite sides of the fence who all shared one common interest – and that was the music which was appealing to all of them. One of the strongest musical forces was the punk movement, which was particularly strong in this particular corner of the Überverse in that period – which is, as its title suggests, reflected in this about-to-be released three-disc compilation set. It takes its name from the first in a trilogy of documentaries by the US-born film-maker John T Davis which chronicled the emergence of the Northern Irish “alternative” scene, as it more trendily came to be described.

Old-school ÜR readers will be familiar with the two most high profile punk acts to have emerged from the brick-strewn burned-out back streets of working class Belfast and London/Derry – Stiff Little Fingers and The Undertones, as well as, hopefully but to a lesser extent the likes of Rudi, The Outcasts, The Defects and maybe even Starjets, XDreamysts and Ruefrex, all of whom enjoyed lesser degrees of awareness over the other side of the Irish Sea (and, in the case of The Outcasts and The Defects, continue to do so thanks to their longevity). But, as its 74 tracks highlights, there was a lot more going on in the Norn Iron scene, with every street corner seeming to have its own loutish band of rock ‘n’ roll preachers… compounded by the fact that some bands seemed to swap members more often than most of them changed their underpants…

This collection – which comes in a deluxe book-style alongside a restored version of the titular movie and a 70+ page booklet – contains a wealth of long-lost gems from the archives of the likes of Rip Off Records (a name that exists to this day, thanks to one of Belfast’s last remaining alternative lifestyle stores). It also very clearly demonstrates how “poppy” many of the songs actually were: this can be attributed to the fact that many of the musicians involved were actually that – musicians, who came from the Irish showband scene and crafted their skills playing faithful covers of the big chart hits of the day before moving on to find their own expressive outlets in the punk movement.

I must admit that the Northern Ireland punk scene by and large passed me by. During the period featured here, I was living in a rather sleepy commuter town some 25 miles outside the epicentre of Belfast and was defining my musical growth through TOTP introductions to Motorhead, Judas Priest and Rose Tattoo, and late-night under-the-duvet sessions with Tommy Vance. It’s only in more recent years that I have started to dig into this aspect of my hometown’s musical heritage, and the more I discover the richer I feel, as this little corner of the Überverse truly was responsible for some terrific tunes and I can see how it can be argued that, despite its remoteness and the peculiar challenges it faced at the time, Northern Ireland, more than any other region, helped to shape the sound of pop punk as we know it today…