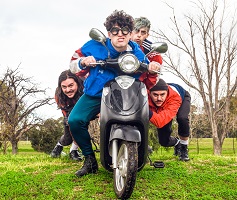 Now and again, a young band comes along who pique our interest sufficiently to make us want to delve more into their story and give them a little more exposure than a mere single or EP review… So it was that I recently took a break from travelling the length and breadth of the Über Kingdom to fire up ye olde Überfone to the Antipodes to catch up with pop punk newbies Bakers Eddy, who last month released their latest single and also have just signed to Ivy League/Mushroom Records.

“We’re from Wellington via Melbourne, and we enjoy standing on armchairs, dipping our fingers into hot wax and soft handshakes,” the lads – Ciarann Babbington, Ian Spagnolo, Jamie Gordon and Alex Spagnolo – explained by way of introducing themselves to us and therefore the ÜR massive.

How did you all meet and decide to form the band?

Tinder. We weren’t compatible romantically though. But before that we met in high school and started a band because music is dope and writing and playing our own songs was like meth to us.

Who have been your main influences, whether in deciding to become a performer or in terms of the actual Bakers Eddy sound?

The big ones early on were Green Day and The Mint Chicks from NZ. It’s become a bit of a blur now, though, we’ve been through many a faze. Local always wins though, there’s so many amazing bands playing every week in Melbourne.

Have there been any problems in respect to finding time to rehearse and write together?

Not really. I don’t think you can use having little time as an excuse. We always make it work. If we need to prioritise writing or rehearsal then everything else needs to fall around that. And it’s pretty much always been that way for us.

What has been the biggest problem you’ve faced so far and how did you overcome it?

Starting from scratch in a new city was probably the biggest hurdle. When we moved to Melbourne we kind of realised we had a mountain to climb, being from out of town and totally alone. But we used it as an opportunity to start fresh and pretty much find ourselves individually and as a band. So the whole experience was very liberating and extremely beneficial, because we got some dope as fuck songs out of it.

You have your latest single, ‘Can’t Afford It’, just out, how has the response been for yourselves?

Really good, everyone’s broke as fuck and now we can come together and struggle side by side.

Is it a standalone single, or the precursor of a forthcoming EP/album?

We’ve got the songs for an EP ready to go so we wouldn’t mind some of that. Standalone singles bum me out a bit and we’ve already done that with Leave it to Me, so keen to get a 7” out, then hopefully we can look at getting ourselves into album territory.

Are you guys already looking at touring outside of NZ, or is that more in the pipeline for the future?

Well, seeing as we live in Melbourne… yeah. It’s more a question of ‘are we looking at going back to NZ to tour’. And the answer is, yes we’d love to but we got kicked out of Caroline in Wellington so not until we can sell out San Francisco Bathhouse.

Looking forward, what do you see as the next big step for yourselves?

Well we can now afford to hire an eight-seater when we go on tour so honestly I don’t see it getting much better than this.

You can pick a festival to headline – which would you choose and why?

Tomorrowland. I’m sure that would piss a lot of people off.

Last question guys. Some bands have famous rider requests – Van Halen’s single colour of M&Ms, for example – what are you all going to make part of your regular requests if/when you get to major headliner status?

Lots of cats. Heaps. Like a sea of cats.