Belfast-based noiseniks Archives introduced themselves to us at the tail end of last year, when they emerged out of the darkness and despair of two years of Covidications with their impactful and declarative debut album. At the time of its release, I described it as “deftly crafted and stridently confident”, an opinion I still hold some six months later.

Having somehow managed to miss their every appearance in our mutual home, I took the opportunity afforded by the release of their latest single (see below) to catch up with the four lads and find out a bit more about what makes them tick, their ambitions and how they view the musical landscape as it sits in the post-Covid era. Naturally, with the title of this feature being what it is, I asked them to start by introducing themselves: 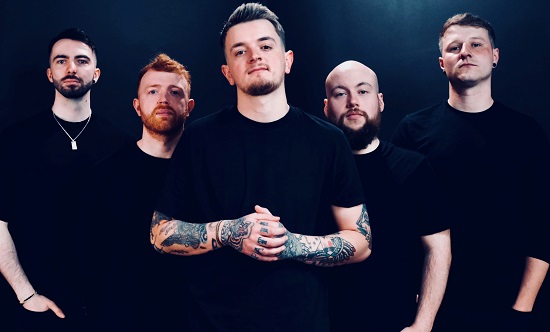 [We’re] Adam Holland on vocals, Stewart Ferguson on lead guitar and vocals , Paul Douglas slaps the bass, Samuel Irwin is on rhythm guitar/liability and our recent addition is “Handsome” Jack Woods on the drums.

During lockdown we all got an urge to make heavy music again and got in touch. Sometimes it takes the world slowing down to figure out what you want to do with your time, ya know?

The band name is a funny one: we were in the process of trying to figure out a name to no avail. One day we asked our producer, Josh Robinson, if he had old instrumentals we recorded a while back, and he replied that they were lost in the archives. The rest is history!

Put as much music into the archives as possible?

I think we draw a lot of influences naturally from the stuff we grew up listening to… Killswitch Engage, As I Lay Dying , I Killed The Prom Queen etc, also a few of us have roots in the hardcore scene and definitely lean into that occasionally when writing new material.

You released your debut album, ‘Decay’, which, as I mentioned at the top of the piece, we here at ÜRHQ loved, at the end of last year… can you tell us a bit about it from your perspective?

We believe there is a good mix of heavy and melodic tracks. One minute you’ll be listening to gutturals and blastbeats, the next you’ll be singing along to a catchy hook of a chorus. We like to think there’s something there on the album for everyone.

[It] touches upon the concept of overcoming a reckless lifestyle of self-loathing/occasional substance abuse and just trying to keep positivity and see that the sun will rise again, and you can go in any direction and don’t need to always burn the candle at both ends.

We believe it’s very important in today’s industry, as this is where people put 90 per cent of their attention these days, right?

Is it more important than, say, streaming outlets especially given the fact that the financial returns for streaming can mean a band doing a lot of work for relatively little reward – i.e. you earn very small percentage returns, with the services themselves taking large chunks of your potential income? Is it worth the effort, or is it a fact of the business that you just have to accept?

I believe personally the effort into streaming platforms and social media should be 50/50. Yes, streaming doesn’t bring much of an income but if you have people worldwide streaming your music everyday it is definitely a positive reach that shouldn’t be overlooked.

The pandemic of the couple of years led to a lot of bands having to explore other methods of generating income marketing themselves. I’m thinking of how many bands found themselves having to go down the live streaming route. And a lot of them charged their fans for watching the shows. I know there are pros and cons to “free” versus “pay per view”, but as a young band I’d be interested to know if, given the shitfuck of the past two years, it is more important for you to get your music out there than to make money out of doing so? I guess the point I’m making is “is it worth some short-term pain for long term gain”?

There always other avenues that can be explored for financial income for a band – merch, etc. Regardless of income from it or not, you have to keep engagement and people interested in what you are doing as a band. It’s not all about the dolla dolla!

I personally think they’re great to watch. What’s better than sticking a full set on the TV and cracking a beer at the end of the day? I’ve never caught one live as it’s on for the first stream however I’ve rewatched when they’re uploaded to YouTube. Particularly, Landmvrks’ one recently I think was brilliant!

Well, in June/July we’re touring England with the guys in Terra IV and can’t wait to get on the road. Beyond that we’ll be writing and working on our next release, and hopefully play a lot more shows between now and the end of the year!

Final question: If you had your choice of any bill to be a part of, who would be the three other bands (signed or otherwise) you would choose to play with?