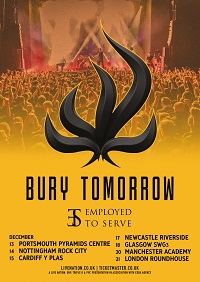 South-coast metallers Bury Tomorrow have announced that they will play their ‘Black Flame’ album in full during their previously announced December tour.

Frontman Dani Winter-Bates told us: “We are absolutely stoked to announce that we will be playing ‘Black Flame’ in full on our tour at the end of the year. As this is the end of the ‘Black Flame’ cycle, we wanted to give fans a special chance to see and hear the album as it was written and intended. We hope everyone is excited as we are! Long live Black Flame.”

Tickets for all dates are on sale HERE.

Earlier this month, Bury Tomorrow recently released a deluxe version of the album, featuring live versions of album tracks ‘Black Flame’, ‘No Less Violent’ and ‘The Age’ from the band’s O2 Forum Kentish Town show at the end of 2018, as well as a previously unheard track ‘Glasswalk’.