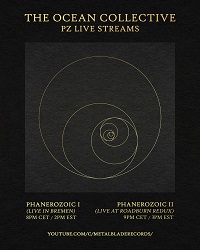 Anyone who’s spent any reasonable amount of time in my general vicinity will know that I am a huge fan of The Ocean, a truly interesting band hailing from Berlin, Germany, known for their extended length songs across several albums, each with their own narrative.

So, imagine my surprise when I get an email dropped into my inbox asking if I wanted to review their ‘Phanerozoic’ live stream; there was not a chance in hell I’d pass up the chance to sit and listen to The Ocean for nearly two hours and gush about it. I really feel with these sorts of live events, you need the visual element to really get a feel for the sort of atmosphere they were aiming for.

Over the course of 2020 and most of 2021, bands such as The Ocean ended up finding themselves in a vacuum with little recourse to express themselves in a live environment due to so many countries being in varying levels of lockdowns and international travel being a non-starter. With many bands opting to use this time as a way to refine their craft, The Ocean went a bit further than just that and decided to jump on the novel way of still creating a “live” show that some other bands had also thought about (Tesseract and Leprous being two). And so, we have the result of this, two live streamed shows playing both Phanerozoic I and II in their entirety.

Each show has a unique feel to it, with ‘II’ being in what looks to be a dusty warehouse, and ‘I’ being done on a more traditional stage set up. Now I’ve seen these guys live a few times now and their live shows are always atmospheric but with both of these streams it feels to be that they got to be a bit more experimental with how it appears. This is especially apparent with the ‘II’ stream often feeling claustrophobic as they’re so close together but the light on the band only highlights their positions, surrounded by darkness. ‘I’ has the more familiar element to it with the copious amounts of smoke, solid single colour lighting and strobes flashing on the more rhythmic parts.

One thing that stands out with both of these ‘live’ shows is that they’ve not just gone with carbon copy replays of the studio albums. Not only do you have the mix that is done live with all of it’s extra juicy acoustics of the room they’re in, but you also have the extra bits of nuance they throw in where the studio recording is no longer the definitive version due to each of the guys throwing in maybe an extra fill or melody over the years.

The video work and editing on both of the streams is outstanding as well, it feels very in-tune with what’s being played, with focus on specific parts of the band when they’re carrying certain segments, this is particularly apparent on the ‘I’ stream with the atmospheric passages having long camera pans and then switching to wide-angle shots when the heavier parts kick in and the lights are going wild.

So not only has The Ocean shown their appreciation for their fans’ support for what has been a very tough time for musicians, they’ve also shown their love for the work that they do. Phanerozoic I and II are both outstanding albums and seeing them opt to put this sort of thing together shows a level of tenacity that they were not willing to give into the bleakness of recent times.

I would urge you to see the full shows on stream/DVD if you can. They’re definitely worth checking out if you want a taste of what these guys look like when they’re doing their thing on stage. Or even if you’ve never heard of The Ocean before and like a bit of prog metal and are on the hunt for something new, give them a look in, they’re a unique band in a lot of respects and have some of the fattest riffs around.