It’s probably the understatement of the 21st century to say that the global Covid-19 pandemic has thrown the music business into complete and utter chaos, with touring schedules decimated, festivals cancelled, album releases delayed… the situation confronted by many artists, especially as to whether or not they’ll be able to continue as before once we, eventually, come out the other side of this crisis and return to some form of normality.

Prior to the international lockdown being introduced – or not, in some cases – Memphis hard rockers Every Mother’s Nightmare were in the final stages of recording their latest album. Earlier this week, the band’s frontman and founder, Rick Ruhl, checked in, via the offices of EMN’s record company, HighVolMusic, to give us an update on where things are at with both the recording and the band itself:

“Ten songs are recorded, mixed and done. We’re going back in the studio and recording one more song, for a total of 11.

“The band has performed incredibly. Everyone has stepped up and kicked it in the ass. Johnny and Gunner have taken their guitar playing to a whole new level, Troy (The Viking) is as solid as ever and has really delivered some killer bass lines on this one, and Bone… man, he has really brought things to a different level in the band. His timing is spot on impeccable and his playing is first class. He’s doing things on this record that are amazing bar none. Bone and Troy have really locked in as a rhythm section. This record is really different.

“I’m really happy with this new album. Every record that I have ever recorded I was never 100 per cent satisfied with. There were always things I found wrong with each one that I wished I could have gone back and fixed before they were released. It was always a sense of rush to get things done so it just was what it was. But, on this new record I am over-the-top satisfied: it’s good, real good. The songs are strong and a left turn from anything we have ever done previously. All the ingredients are there. It’s just unbelievable the chemistry this band has and what everyone has brought to the table and what we have been able to achieve. It is like lightening in a bottle.

“When [HighVolMusic CEO] Bill Chavis said he had booked us in the studio for three months, I was like that’s a long time and crazy. But, in the end, he was right. He gave us the time to do it right and make a great record. Our producer Dave Cowell along with Matt Montgomery are absolutely fantastic. From day one the studio vibe has been comfortable. Once we really dug in and got going, Dave brought so much out of us. He hears all kinds of things and does what producers should do. He also gave me the time and flexibility to do what I do so it was a real comfortable situation not just for me but for all of us.” 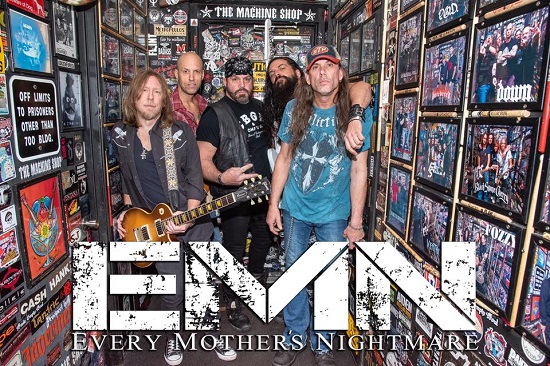 “[‘Grind’] was a good record. We got some good mileage out of it, rode it as long as we could, it’s time for something new. If there was any doubt about ‘Grind’ and who did what, this new one is damn sure gonna clear it up for ya.”

So, does the new album have a title yet?

“Well, the title has changed. I’m not going to tell it just yet. But, team Chavis flew in to Memphis back in March, brought in a photographer and we shot all new photos of the band and did some on location stuff for the album. That photoshoot kinda changed everyone’s mind on what we should call the album – so, yea, there is a new title. As far as the tracks are concerned, like I said there are 11 total. One will be a bit of a surprise I think, but all of that will be released in due time. The packaging is going to be over-the-top most likely.

“Once Bill heard the mixes he came out of the studio eyes all big and glassy like. I knew he was already scheming a plan! That guy is always working and plotting a plan. He says the package has to match the music. He’s already sent some ideas to us. We’ve been able to have input from everyone in the band and tying it all together. We really have a great team working with us now.”

Bearing in mind the current circumstances, are there any thoughts as to a possible release date?

“It was supposed to be in June, but with all this Covid-19 stuff happening things have been pushed back. [We’re] not sure when just yet. Timing will be key, and the album still has to be mastered. We are going with Mike Kalajian at Rogue Planet Mastering. It’s all been set up, we just have to finish the last song and then its off to Mike.”

Obviously, all other future EMN plans are somewhat up in the air at the moment as well…

“This virus thing has shut down the world. Hopefully, things settle down a bit and life can resume to some normalcy. It’s just the nature of this beast right now. Chavis is working on a documentary for us. He setup a film crew to come in and film us in the studio while he was here in March. We did some Q&A about the album, the making of… and that sort of thing. So, I know that is in the works right now.

“Like I said, Bill always has something going for us. We have also been talking about releasing a single. There is a song that ties in a bit with this pandemic thing, but [we’re] not sure just yet when or if even that is the song. Our radio folks will build us a game plan. We are also planning a bit of a concept video or at least a bit of a story line, maybe two, for the new record. Plus, a new website is being built. So, we still have a lot of things to do and get finished for when the record comes.

“It looks like we are still going to Europe later this year – that is if things open back up. There’s probably some other stuff I’m forgetting, but this is the gist of what’s happening right now.

“I’m anxious for everyone to hear the new record. It is nothing like we have ever done before. We are all excited for what people are about to witness. We are dedicating this to the faithful.”