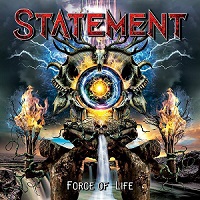 This is the third album by Copenhagen based Danish hard rockers Statement.  The first two albums delivered a blend of hard rocking heavy metal that this offering develops even further.

The first track, ‘The Hero Inside’, gets you in the swing with a pirate metal sounding hook that has you imagining you are on the set of ‘Vikings’ that will definitely get ale horns emptied by swilling locals of any venue joining in.  This may sound a bit trite but underneath this there is a rock-solid rhythm section and duet of very well played guitars all blended well with the lead and backing vocals.

‘Darkness In Your Eyes’ opens with a duet of duelling guitars (Lars Ulrik Le Fevre and Niels Alex Larsen) and drum beat that shakes your eardrums before the vocals kick in.  So far, the similarity with other European rock bands is easy to make with both tracks reminding me of the Scorpions and then leads into ‘Higher Ground’, a more pop rock than heavy rock track. However, there’s nothing bad in that.

‘I Wonder Why’ gets a fair bit heavier with a double-kick drum beat that would have James Hetfield hollering “YEEAH” at the end of every line but the vocals are much more Scorpions.  ‘The Hurt’ begins with a riff that reminds me of ‘Sunshine of Your Love’ – but then the chugging bass (Martin Poulson) lines grab you by the gut and drag you kicking and screaming through the rest of the song.

An ear-splitting cacophony of drums and guitars rattle into ‘Force of Life’ which has more of a Metallica feel than anything else on the album and would go down a storm on any Bloodstock stage. Then there’s a real curveball, a metal opening wakes you up to a soaring airy guitar riff before their version of the Mamas and Papas’ ‘California Dreamin’’ that is very well done and you will find yourself singing along to.

‘Rock Your Heart Out’ returns to the “pirate” style with a bass line of Martin Poulson and drum track by Daniel Nielsen that grabs your liver and rips it out.  ‘Feeling Scared’ will have you rhythmically nodding your rocking head and tapping your feet no matter what style of rock you like.  The power and vocal range of Jannick Brockdorf would have many vocalists thinking, “damn he’s good”.  Closer ‘In This Moment’ reminds me of some of the Berlin tracks of the late ‘80s.

Altogether, an excellent collection of varied rock tracks that is well worth a listen and if you get the opportunity to see them live, I would wholeheartedly recommend it.