Robby Krieger – ‘The Ritual Begins At Sundown’ (The Players Club) 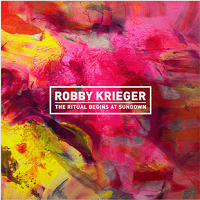 Robby Krieger is probably most well known for his stint as guitarist in The Doors. Born in LA, his early love was for classical music but after an initial attempt to learn to play the trumpet, he found the piano and used it to play mostly the blues. Krieger joined The Doors in 1965 after the departure of co-founder Ray Manzarek’s brothers, Rick and Jim from the original band, ‘Rick & The Ravens’. The Doors never replaced the bassist as they felt this gave them a unique sound, and it is this piece of information that hints at the talent that existed within The Doors.

Robby Krieger is indeed a talented musician and perhaps should be more widely recognised as such. More than lead guitarist for The Doors, he also contributed heavily to the writing of their lyrics. Krieger has also featured on or contributed to many albums in which by far the most of his credits are for writing and arrangement of music. In 2010, he released ‘Singularity’ which was nominated for a Grammy Award.

A decade later ‘The Ritual Begins At Sundown’ is ten tracks and 52 minutes of laid-back, mostly instrumental jazz-rock over which Krieger’s effortless guitar solos languidly impress and beguile. Arthur Barrow, once bassist for Frank Zappa, is co-producer and features alongside an array of well known artists such as Big Band musician Sal Marquez on trumpet.

The album begins with ‘What Was That’, the words that constitute the only lyrics that appear in an outro in this quirky upbeat opener. The feel is unquestionably jazz from the start. However, single ‘Slide Home’, released back in March feels different to the rest with finger pick guitar rhythm and Krieger’s use of throaty slide guitar giving the track a 70s psychedelic feel.

Another single, ‘The Drift’ follows bringing with it the 60’s and some Zappa inspiration in the solo. You can hear a bit of The Doors in this one, as well as a lot of blues. ‘Chunga’s Revenge’ is actually a Zappa cover and Krieger is open about his influence on ‘The Ritual..’

‘Hot Head’ ramps up the energy while ‘Yes, The River Knows’ reigns things back into a mellow, low-toned flow. Meanwhile, the grainy rock intro to ‘The Hitch’ is a nice switch up as a lead in to a track that progresses into funk.

Towards the end of the album, if you can bring to mind The Pink Panther theme tune as written by Henry Mancini, you’re in the realm of ‘Dr Noir’ while ‘Bianca’s Dream’ feels more like blues. Finally, ‘Screen Junkie’, a song written after Tommy Mars (Keyboards) was nearly run off the road by a driver who was on her phone, speaks of obsession and foolishness in relation to the use of modern technology. It’s a plea to just put the screen down that ends with a Ska cacophony of chaos.

If you like trippy jazz with a blues feel ‘The Ritual Begins At Sundown’ is for you. Krieger once said that to get jazz you have to understand music. This is someone who understands music of many genres. Just listen to the intricacy. A talented musician indeed.