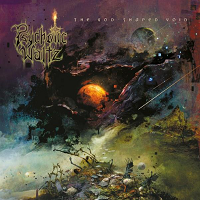 Inexplicably, I have somehow known the name Psychotic Waltz over the past 30 years but do not remember ever hearing the band. I can blame the lack of internet I suppose for part of that but not all of it as I have definitely been missing out on a band that needs to be heard. Progressive metal and I have a complicated relationship with me enjoying many bands in the genre but sometimes have trouble staying connected for overly long songs without something that grabs me. This album cranks up the metal, incorporates many twists, and makes sure that you are singing these songs later or going through multiple musical hooks in your head when it is done.

‘Devils and Angels’ comes to life via an interesting intro with a middle eastern touch that then roars to life with solid rhythm and hypnotic vocals in the verse. The musical break with the chorus casts light on the song, and the hook gets planted into the brain. Musically, there are multiple passages that take us different places. My favorite part of the opener is how they transition to a quieter section that sets up the roar of the final minute. Next up, ‘Stranded’ has a guitar riff that immediately lodged itself in my brain with this one featuring another strong chorus. The rhythm work of Ward Evans (bass) and Norm Leggio (drums) is flawless throughout the course of the album with this song just being one example. Psychotic Waltz turn up the heaviness on ‘Back to Black.’ There remains plenty of melody with another huge chorus. I have paid more and more attention to the lyrics by vocalist Devon Graves with each listen and must say that they have drawn me deeper into the album as well.

They keep the next song compact as well with a running time under four minutes with ‘All the Bad Men’ feeling very direct but losing none of the band’s personality. I imagine the groove in this song will be rocking buildings off their foundation for a long time to come. The guitar work of Brian McAlpin and Dan Rock do a tremendous job of adding extra crunch when needed but also adding subtle nuances when they are needed with both of those styles being displayed here. Vocally, Graves sings cleanly and melodically which is perfect for me on these songs. This one transitions seamlessly into the acoustic intro of ‘The Fallen.’ This song does a great job of wrapping up the midway point of the album with a moving epic. The slow build is given plenty of time to develop, and this song would not be out of place on an early or recent Queensryche album. The lead into the guitar solo is excellent.

Kicking off the back half of the album, the band also uses an acoustic intro for ‘While the Spiders Spin.’ Between the title and the delicate passage, I do think of things like the Hobbit. This one quickly transitions though with the band knocking down the walls in less than a minute. This has been an early favorite for me with the chorus being longer and not as direct as many of the other songs. It has subtle layers of hooks placed within the song. ‘Pull the String’ focuses on a heavy beat with the vocals in the verses feeling almost spoken to a kingdom as opposed to simply sung. That guitar riff is short but killer as well, and there really are not too many crushing metal songs that incorporate the flute. ‘Demystified’ is another one that incorporates a lot of acoustic guitar and other touches, so it feels very different, and the chorus is beautifully done.

‘Sisters of the Dawn’ again turns up the heaviness as it feels like the world is spinning through the power of this one. This one features a much more cutting verse but still balances it with a chorus that takes a few listens to truly sing along, but it will take hold with a few listens. The middle passages of the song are incredible with the band making sure every second of this epic delivers. Wrapping up the album, ‘In the Silence’ ends it with another epic that continues the combination of the acoustic guitar interlaced throughout the song with plenty of heavy sections that get the head banging. The electric riffs also hit the spot with the guitar solo really shining.

Psychotic Waltz has delivered an epic record to start 2020. I would still be in the dark on the band if the owner of Music Town record store in the Houston, Texas area had not sent me a YouTube link asking if I had heard these guys. This one is brilliant from start to finish with one extra song not being included in the edition I reviewed so even more reason to go out and buy this one.