Prophets Of Addiction – ‘Nothing But The Truth’ (HighVolMusic) 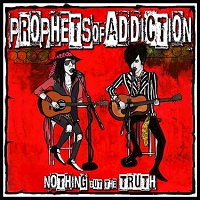 While this new acoustic opus from LA glunksters Prophets Of Addiction could be seen as something of a “stopgap” offering between “proper” rock albums, especially given the back story involved, it most certainly does not feel or sound as such.

Regular ÜR readers should know the aforementioned back story, as POA frontman Lesli Sanders explained it in depth last week. However, to summarize, it has its gestation in drummer Wayne Stokely falling ill at the beginning of 2017, just as the band were starting preparations to record the new album; subsequently, he was diagnosed with MS and then lost his sight. As Stokely began the long road to recovery, Sanders and partner Glenn ‘GG’ Gilbert fulfilled immediate touring obligations unplugged, before temporarily recruiting Jason Russo for full band shows. Eventually, the decision was made to put the new POA album on hold until Stokely was well enough to return (and the good news is that he has started playing again and recording is scheduled to start in December), and so Sanders and Gilbert decided to use already booked studio time to record this collection of stripped-back acoustic tunes. And that’s in a nutshell (I think – no doubt Lesli will correct me if I’ve got anything wrong…).

As I said, ‘Nothing…’ could be seen as a “stopgap”, but certainly doesn’t have that feel or sound. It is, in fact, a fully-grown album in its own right, and one which offers an invaluable insight in the rock ‘n’ roll lifestyle, Hollywood fashion. Its songs are the stories of a survivor: someone who has been there, done that (and more) and survived to tell the tale. Sanders is a veteran of the first wave of the LA glam scene who has lived to look back and share his experiences with a new generation of glunksters.

This is evinced no better than the lead track, ‘American Dream’, with it’s opening line of “Just looking back/we had it all/so it seemed/we were the ones you wanted to be…”, Sanders’ drawling vocal filled with pathos and regret, but also thanksgiving in the fact that he is actually able to look back and recount experiences which many of those with whom he associated in that period are no longer here to recall but instead rely on the likes of Sanders and his fellow survivors to do it for them.

With a lyrical insight and playfulness that would draw comparison with UK counterparts such as Ginger Wildheart, Ricky Warwick or Tyla J Pallas, Sanders reaches deep into the soul of the listener and embraces them with his experiences, delivering his message of hope through the despair. The likes of ‘Babylon Boulevard’ are the total antithesis of all the “feelgood” anthems about living the American dream which dominated the charts when Sanders’ contemporaries were shooting up and getting wasted, thinking they were doing just that. But, there is also a deep sense of mournfulness and regret pervading these deeply personal songs, such as on ‘Talking’, in which he laments that “there’s no talking to you/you turn all my answers into your questions before I’m through”, or ‘The Last Of Words’ (which, in a weird way, reminds me of The Almighty’s ‘Bandaged Knees’, at least lyrically), on which he asks “do you listen to anything that I say/or am I talking to the dead again?”.

As I said, ‘Nothing…’ is a deeply personal album, one which definitely, and defiantly, lives up to its title, as Sanders leaves no stone unturned and no confession untold. It is also a beautiful album; yes, the subject matter is extremely dark, but it is delivered with a genuine passion and a gladness to be alive and able to share this wonderful music with us. As Sanders says on ‘Atmosphere’: “hello, I still out here”. And we’re glad you are, my son, as songs like these simply need to be shared.

‘Nothing But The Truth’ is out now. You can get your copy HERE.