It had been nine years since Dublin death dealers Primordial had ventured north of the border to grace the back streets of Belfast with their presence, so to say that this was one of the most eagerly anticipated metal gigs of the year to date would be something of an understatement… in fact, they play the island so infrequently that everywhere I turn I meet folks with southern Irish accents, demonstrating once again the distances true fans will go to in order to witness their favourite bands live and in the flesh. 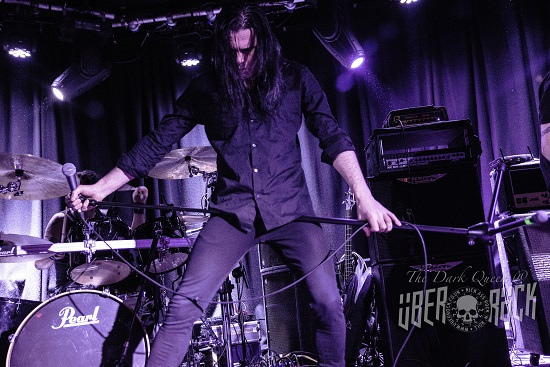 Openers Death The Leveller hadn’t left it as long as the headliners to return north, having graced this same stage as recently as last November. Their thick, sludge-encrusted doom is characterized by dank-downtuned riffs and a bottom end muddier than the nearby Lagan. This heaviness is counterparted by sharp, precise percussive interjections and topped off with vocals drawn from the very depths of Hades itself, reminding in a way of the late Peter Steele in their effectiveness. A tight beginning to the evening’s entertainment.

Apparently the supporting cast had been hand-picked by Primordial frontman Alan Averill (or Nemtheanga as prefers to be known on stage), and so we are treated to the Belfast debut of another Dublin crue, Senzar.  I was familiar with frontman Paul Nash from his previous project, Coldwar, so was interested to see if he had taken a different tack with this new outift. And, he immediatedly proves he has, as a dark menace pierces the red-lit, smoke-filled gloom, to be replaced by dank, dense layers of sludge piled upon sediments of centuries old mud. Gloomy, nightmarish riffs are teamed with acidic, soul-piercing vocals, while winding guitar melodies permeate the thickness of the overall sound, which echoes with references to ethereal doom as well as old-fashioned classic rock sensibilities. Very enjoyable indeed. 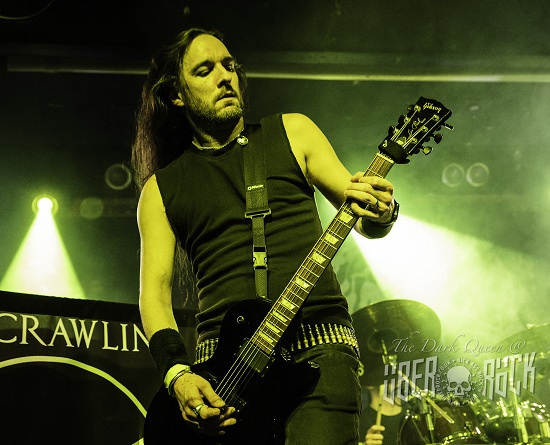 Local heroes The Crawling, who just the previous day had unleashed their new video, the highly appropriately titled ‘Rancid Harmony’, deliver so many tonnes of heaviness that they would sink the Titanic 100 times over. Their dark equilibrium is impressive in its equally dense hypnotism and, despite being just a trio, they manage to layer atmospherics, combining them with a totally apocalyptic aural assault that is as entrancing as it is brutalizing. The experience of listening to the likes of ‘Dragged In Shallow Waters’, especially live, is just like the title, while Andy’s maniacal charisma ensures that your attention never wanders from the stage… 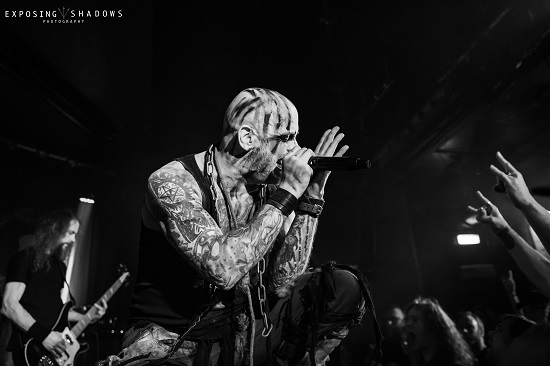 Talking of charismatic frontmen… After what seems like an massively long turnaround (maybe it’s just the sense of expectation that makes it drag out), Greogrian chant oozes from the speakers before Averill/Nemtheanga climbs onto the tiny stage, stands astride the stagefront wedges and declares “we are Primordial and we stand shoulder to shoulder with greater men”. The frontman towers over the stage, a hugely dominant and forceful presence, commanding and commandeering, his blood red eyes staring into the very souls of every onlooker, so much so that the audience immediately answer each and every one of his rallying calls, be it raising their horns or their voices… and we’re only on the first song.

What follows over the next 75 minutes is a masterclass in dominance. The band deliver tight walls of noise that wash over you like a tsunami-size serein tide. Despite his trademark scowl, Nemtheanga is smiling under his facepaint, the audience a broiling, seething mass of movement which is a ceaseless as it is rhythmic. Plunging the depths of the band’s catalogue, the faithful are rewarded for their nigh-on-a-decade long wait with a song never played live before, ‘End Of All Times (Martyrs Fire)’. 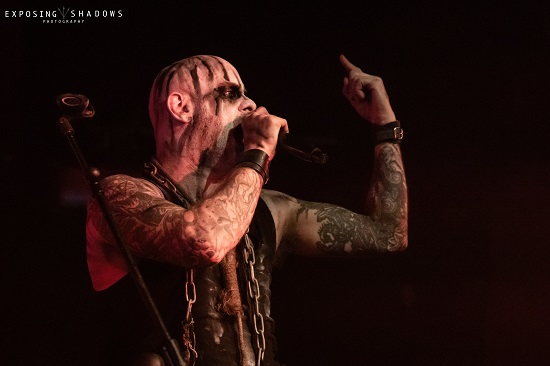 Once you get past what can been seen as his arrogance, one thing has always impressed about Averill is that he actually sings, rather than hiding behind deathgrowls or needless screams, which it makes it easier to trigger the massive chantalongs which continue throughout the set. And, despite his Nergal-like theatrics dominating the front of the stage, the band are no bit players, and anyone who dismisses Primordial as merely a pagan metal band is sorely mistaken: they have so much going on in their sound, so many multiple layers that touch on folk, alt-rock and even NWOBHM.

Pantera once wrote about taking things to a new level: this evening, Primordial proved that they have been there for quite some time and intend to remain there for just as long, if not longer. I have no doubt that this will be one gig I will look back on towards the end of 2019 when I come to compile my dreaded ‘Gigs Of The Year’ list for our annual round-up of such things.