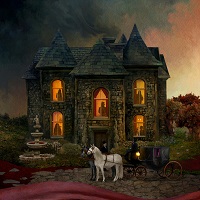 Few bands will ever experience the creative highs of Swedish prog metal masters Opeth. Starting with 1999’s ‘Still Life’ and running flawlessly until 2008’s ‘Watershed’, the band produced a non-stop succession of masterpieces, blending death metal, folkish elements and prog inventiveness into a package that helped to elevate the wider metal genre. In turn, this helped spawn a procession of high-minded brilliance which today can be found in everything from Nailed To Obscurity to Conjurer, the Swedes’ distinctive long-form metallic epics laying roots deep in the metal genre. And then, they changed.

Opeth’s decision to forego death metal on future releases at the start of this decade with ‘Heritage’ marked an enormous shift in the dynamic of the band, taking them away from the metallic and driving into purer prog driven soundscapes where the band could flourish in a different way. Whilst by no means the first time they had opted in for a ‘clean’ sound (2003’s ‘Damnation’ is a masterpiece of understated haunting melodies), ‘Heritage’ felt like a clean break for the band, turning to something completely different and re-finding themselves in the process. And it was good; some of the songs produced this decade great even, but still a creeping sense suggested that some of the enormous dynamics had dulled some, that without such extreme contrast the band struggled to create such divisively brilliant masterpieces as flawlessly as before.

Enter, ‘In Cauda Venenum’. Opeth’s 13th record posits that what the band lost wasn’t a dynamic in the heavy/soft range, but instead an inherent oddness and ethereal charm that created a gothic atmosphere not entirely unlike a Hammer classic. Instrumental opener ‘Garden of Earthly Delights’ makes use of synthwave-like keys alongside a gothic choir to drive home just how flawlessly this band can mix the old and new, setting the stage for a stunning epic every bit the successor to the band’s glory days. Ever the virtuosos, every song on ‘In Cauda Venenum’ features peerless musicianship that truly helps the record to stand out both against its peers and the back catalogue. Indeed, it feels like Opeth have never sounded as good as what they achieve with Park Studios here, instruments layered to feel orchestral (especially when an actual friggin’ orchestra kicks in), perfectly counterbalancing the more dainty structures favoured in verses. It’s a stunning and dizzying dichotomy that pays off with enormously exciting accomplishments, whilst also having the decided bonus of making them truly feel like a heavy metal band again.

Just hear the howling guitars of ‘Dignity’ (and try to tell us that it isn’t of the same bastard lineage that once gave us Black Sabbath’s ‘Hole in The Sky’. In fact, this record seems to so perfectly balance those two most primordial ingredients in the Opeth soup – ‘In Cauda Venenum’ is Black Sabbath meets Scott Walker at his most melancholic and dramatic, pieced together in a spooky way that only Opeth can truly be. That’s the thing – Opeth really have leaned back into their sense of baroque ghostliness again for album #13, so many of its tracks meandering their way along as they conjure a soundtrack which could cover everything from faerie-infested forests to the greatest hits of universal monsterdom.

Recorded both in the band’s native Swedish and English (this band don’t do anything by halves, if you can’t tell), ‘In Cauda Venenum’ seems to be a definitive statement from Opeth about exactly who they are – and who they want to be. Going from success to success, these days it feels trite to tag them as a cult band, but there is a devotion within Opeth’s fanbase which certainly lends itself to the ardour of underground fandom. Like all bands with a kernel of ambition, Opeth are maturing into their craft with remarkable canniness, the songs sounding bigger and more elaborate than ever before. As previously stated, the disparate elements of Opeth’s sounds are brought to the fore like never before thanks to the production work that has gone into this latest release, meaning each segment is given a hefty spotlight to showcase just what the band can do. Additionally, the inclusion of strings and symphony orchestration suggests an exciting new dimension to what Opeth can achieve; after all, while so many rock and metal bands are incorporating symphonies these days (from Alter Bridge to Sepultura, no less), few have the enormous segments and builds that Opeth do that can make a piece of music feel truly transcendent.

‘In Cauda Venenum’ sees Opeth at their most majestic and imperious in years, absolutely assured in both composition and instrumentation that they stand out as the crème de la crème. Truthfully, this record feels like what the band have been working towards since 2011’s ‘Heritage’, removing themselves from their death metal roots and redefining heaviness through sheer scope of ambition. If this is the start of another run of straight-up masterpieces, all we can say is – viva le renaissance.