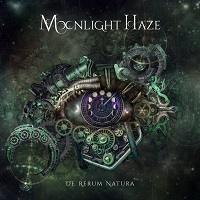 Moonlight Haze’s debut album ‘De Rerum Natura’ has an impressive lineup both in the band itself and in the guests. You can definitely hear an influence from Chiara Tricarico’s time with Temperance as the sound here is similar to the things she was doing back then but more developed and evolved. ‘De Rerum Natura’ takes far more advantage of her vocal range and musically has a much more aggressive and passionate tone.

Every song has a great evolution to it, changing throughout the experience so that no moment is dull. There are also a lot of unique musical elements such as the use of a Guzheng as well as some folk instruments that I can’t identify directly – and there is even some use of acoustic instruments mixed in a couple of the songs helping to make a very complete experience that does not feel like it gets overdone or lost. Instead, you get an experience that feels like being part of an epic fantasy exploring beautiful worlds previously unknown with all the nuances that a whole world would have to offer.

Vocally, there is a lot to be said. With symphonic metal you expect at least some operatic vocals; however, what is delivered here is shockingly powerful compared to many others. Chiara has a very powerful voice that flows effortlessly from a soothing melodic tone to a bone chilling opera and finally to an almost snarled low sung vocal that somewhat reminded me a little of the very early Paramore. It was nice to hear not only so many styles but to also have them all used together in the same song. There is incredible vocal control shown in this album that is somewhat hard to describe. It really needs to be heard. ‘Dark Corners Of Myself’ is probably one of the best songs to show off not just the vocal range but also the variety of instruments used as well. However, you will just have to wait to hear that one and it will be well worth it.

‘De Rerum Natura’ is a must listen. This is an album that I think could convert that one family member or friend that just does not understand what you like about metal. If you have any passing like for symphonic metal at all your collection would be defiantly lacking without this work of art. I not only think this album is a landmark for the genre but I think it will bring many new fans that had never considered metal before. It will be a stepping off point for many to reach deeper into other types of metal over time.