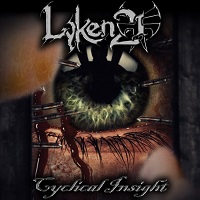 New Jersey based four-piece Lyken21 take their inspiration from traditional heavy metal and blend in hard rock and symphonic elements. Since their debut release, 2012’s ‘Chaos B4 The Crime’, they’ve steadily built up a solid reputation for producing hard hitting metal with big catchy riffs and aggressive rhythmic delivery. Their heavy dynamic consistency has won them a strong fanbase and has made the metal community take notice. Now, they’ve teamed up with some of the creative forces behind the likes of Dillinger Escape Plan and Mike Portnoy to produce a brand-new album offering 11 fresh tracks. Is this to be another building block for their metal fortunes?

With an aggressive assault of catchy, chopped guitars and pounding rhythm section ‘Assassin’ opens the album. The distorted guitars drive the pace of the track and when combined with the bass and drums create a headbanging attack. The structure of the track moves well between defined verse/chorus sections and opens out to allow the guitar solos a decent run. A solid opening number that introduces the listener to the hard-hitting metal sound of Lyken21.  ‘Shadows’ picks up nicely from the opener, staccato drums and a high pitch vocal wail herald a Judas Priest/Classic metal like number.  With the guitars retaining a catchy drive but taking on a more galloping delivery with the riffs, the listener is reminded strongly of the NWOBHM elements of the Lyken21 sound. With a twist of additional electronic sounds working in the fade out, there is something a little bit different that gives ‘Shadows’ an extra edge.

‘Sanctified’ showcases more of a melodic delivery to the band’s sound. The structure is once again well crafted allowing for a good flow to the track and with each on the instruments clearly identifiable in the mix yet blended to provide a unified sound. The guitar work leads the melody complimenting the vocal lines with the tight rhythm section laying a solid foundation. The guitar solo builds on the initial melody lines and rises before returning to the main drive.  From here on in the album builds upon the themes and styles laid out in the opening tracks. ‘Good Can Be Good’, ‘Hell’s 4 Children’ and ‘Starlight’ all feature overlays of NWOBHM and traditional metal styles married with strong melodic influences. As the album moves into its latter half there are some variations to the track structures and stylistic elements that offer sonic interest for the listener. The nine minutes of ‘Revelation Reality’ offers some spoken word elements as the lyrics take on a socio-political standpoint against religion and are backed up by a sweeping guitar-based melody. ‘Doomsday Deception’ has the added extra of being sung in German which adds an extra punch to the weight of the brooding aggressive metal.

There’s a lot of music to be enjoyed on ‘Cyclical Insight’ from the Priest and Maiden inspired galloping tracks to the more melody driven hard rockers. Thanks to the clear mixing, the musicianship of the band can be clearly showcased on tracks such as ‘Shadows’ and the excellent guitar work on ‘Lost in My Head’. The structure of the tracks indicates the song writing ability of the band that has enabled them to create the music that has won over their numerous fans. While this album will undoubtedly continue to build upon their reputation and offer more to their pre-existing fans. Some may feel that this album does not offer the best of Lyken21. At times it can be argued that the flow of the music stagnates and loses it’s focus. Some of the riffs and rhythmic drives are predictable and don’t offer anything fresh as tracks can blend into one another. However, there is still much to be enjoyed as mentioned above and ‘Cyclical Insight’ still provides a great addition to a metal collection.