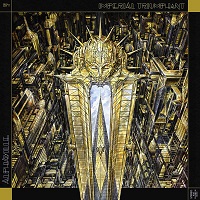 Imperial Triumphant officially began back in 2012 with their first full length release ‘Abominamentvm’, but the band’s roots actually go back to 2005. Formed by Zachary Ilya Ezrin in New York City, the band back then were regarded as a neoclassical black metal band and had released two EPs before their first, full length official release with ‘Summons To War’ in 2008 and ‘Obeisance’ in 2010.

The band’s early material was based around the themes of history and anti-Christianity, before transforming into the avant-garde black metal band that fans know today, with material that now mainly focuses on philosophy and urban decay. With four EPs and three full length studio albums under their belt, we now see the release of their fourth album and the follow up to the hugely critically successful ‘Vile Luxury’, released in 2018.

With the direction, creativity and diversity that the band took with ‘Vile Luxury’, you couldn’t help but wonder where the New York City trio were going to go next. Would this new release see the band follow it with the Jazz heavy brass sections which worked to amazing and unique effect, or would they go in a completely different creative direction altogether?

The real standout track from ‘Vile Luxury’ without any shadow of a doubt was ‘Swarming Oppulance’: Jazz-infused black metal with its big band feel,complete with accompanying horn section, it was like nothing I’d ever heard before and I was curious to know if we were going to get more of that with their new full length release ‘Alphaville’.

For ‘Alphaville’ the horn sections are not used as frequently and don’t stand out as much as they did on their previous release. Don’t get me wrong, the jazz vibe is still there. Just this time around, the jazz influence is primarily through the guitar work and bass lines. Instead of releasing another ‘Vile Luxury’, the band has decided to take a different approach with ‘Alphaville’. Yes, it has a somewhat similar feel musically to their previous album, but this release sees them continue to broaden and really go at it experimentally.

The use of horn sections that really stood out on ‘Vile Luxury’ and gave it a very New York City vibe are cut way back on ‘Alphaville’. Instead the band becomes more creative and diverse with the inclusion of choirs, chants, taiko drums, synths and a multitude of other additions. Oh, and I almost forgot to mention, there is a barbershop quartet in there also.

Two of the main standouts on this release have to be the bass guitar and drums. There are some very nice jazzy baselines on here as well as some outstanding and complex playing from Steve Blanco. As for the drumming, it just amazes me how faultlessly Kenny Grohowski weaves the smooth jazz drumming through the black metal style of drumming, which at times he plays at blinding speeds. Vocalist and guitarist Zachary Ilya Ezrin adds his deep growly vocals as well as some nice melodic guitar work along with some heavy doom laden riffage.

The album includes nine tracks. Seven originals and two covers: ‘Experiment’, which was originally done by Voivod, and The Residents ‘Happy Home’. These two tracks work really well with the rest of the album as the band have added their own unique spin and sound to them.

All in all, ‘Alphaville’ offers the listener a very unique listening experience. A release that is very experimental, that is weird but at the same time wonderful, aggressive and sometimes melodic, dark and at times atmospheric.

‘Alphaville’ is an album you will never have heard the likes of before.