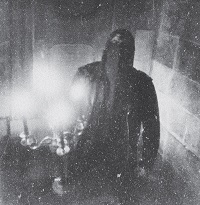 I must admit that this EP did cause a slight degree of confusion when it arrived at ÜRHQ, given the proximity of the project’s name to that of the last (but one) band we managed to catch live before the ban on gigs came into effect slightly more than 13 months ago… However, it was immediately obvious – and perhaps indicated by the title – that we were not dealing with an Edinburgh thrash attack, but something altogether darker and more esoteric…

Emanating from the bleakest, most desolate and remotest regions of the Scottish highlands, Ifrinn are shrouded in the dank, pervasive mists that make their homeland one of the most enervatingly and vivaciously beautiful places on earth: a place where dark arts can still be practised without being detected by grouse-hunters speeding by in their top of the range SUVs without paying any attention to the forbidding majesty of the landscape around them. And it these same qualities of forbidding majesty that this EP, its three tracks spanning just shy of 24 and a half minutes, possesses, entrancing and enervating the listener in equal measure, while drawing them inexorably deeper into the dark rituals to which it provides the soundtrack.

In these dark days when much of black metal has lost its true path, following the latest “kvlt” sound or pandering to perceived need to crawl out of the underground and into the devastating light of the “mainstream”, this is, indeed, Caledonian black magick at its darkest and most mysterious, and its most exciting, its most malignant, its most atavistic… dare I say, it’s most cultish. Truly evil stuff.