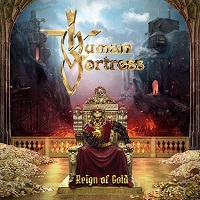 Right out of the gate I have to mention the album cover. Whoever the artist was that put it together, mad props. If I had seen this album on the shelf at the store, I would have bought it based on the art alone. It just screams power metal. You look at it and you have a pretty good idea of what you should expect. The real question is: does the music live up to the high bar that the great art sets? Do we get this epic, hard-hitting and aggressive fast-paced power metal journey that we expect? Or does it let us down?

Well, there is no easy way to say it so I guess I will just come right out and say that I was left a little letdown. Don’t get me wrong, there is a lot to like about this album, but it simply is not the epic power metal album I was expecting. It is too bad too because the album opens up with a track called ‘Thunder’ that set things up beautifully and made me hopeful for the rest of the album but after that track, the whole album slows way down to a point where I hardly recognize it as power metal. More like classic rock with a power metal influence.

That all being said, once you are past the letdown that it is not what you thought you were getting, it is a really good rock album. The vocals are great and have a nice drive to them. The guitar has a great tone. There are some unique sounds worked into the mix that I did not expect, and the drums hold everything together really well. Even if the double kick, at times, feels a little out of place due to the rest of the mix not keeping the same pace.

I think that this album will be a favourite of many but I think that those will be the people who love artists like Bon Jovi rather than the people who lean more toward bands like Dragonforce. It just is not that big epic power metal album I was expecting. It is much more reserved than that and for me, I don’t think it works as well as I hoped. That all being said, I do think you should give this one a try. I think a lot of people will love this just know that it is not as over the top as might be implied from the awesome cover art.