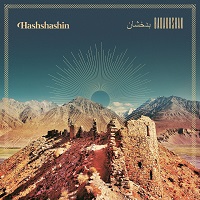 The idea of Middle Eastern-inspired prog has been an interest of mine since many years ago first hearing Hawkwind’s ‘Hassan I Sabha’, from ‘Quark, Strangeness and Charm’ and the approach they took with that particular track. It’s fair to say that, during my first listen through, that is very much the feeling that I get from this release, albeit much more of a prog feel than the space rock that Hawkwind created at that time.

While the band are new to me, this is not their first release I discover, so I check out a few of their previous tracks as comparison and this release follows quite similar lines to the previous. It is more than credible as a stand-alone prog or post-rock release, even not taking into account the Middle Eastern influence that the band use as their signature. They are the creative outlet for the Art As Catharsis music label founder Lachlan Dale, which explains why the band have taken the musical direction they have followed, given his penchant for fusing Middle Eastern music and instrumentation into the likes of prog, ambient and drone to create some quite fascinating songs, something he has managed to do with this group yet again.

The elements that seem to stick out are a mixture of progressive and highly atmospheric post-rock, both of which meld very well with the traditional Middle Eastern approach mentioned above, with the post-rock guitar elements coming more to the fore over very progressive rock drumming in a manner that is really very appealing in an almost carnally tribalistic way, almost as if it sings to your blood and courses through your veins.

This album stands well on its own merits, ignoring who is in the band, providing a highly melodic approach to something that could, if under the wrong guidance, have become little more than a cacophony. It is a journey in itself, from the eastern points of Afghanistan into China, following the ancient silk road, one that you can almost envisage in your head, eyes shut and taking in the music loudly in headphones with what feels almost like the lull, trials and tribulations of what taking that old road may have entailed and in that, it stands as a successful concept in addition to everything above. An intriguing mix that has been expertly blended into something that is more than the successor it was possibly initially envisaged as being to ‘nihsahshsaH’ and worthy of carrying their name even further forward.

‘Badakhshan’ is out now. You can get your copy HERE.