Forlorn Hope – ‘Over The Hills’ (Self-Released) 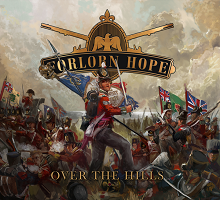 I absolutely love historical metal. I love when music tells me a story. Especially if it is a new one I have not heard before. A few of these songs had me going to google to look up some historical context I was previously unaware of. ‘Over The Hills’ works well to listen to in the background while doing other things but also, thanks to the subject matter, has enough depth that if you sit down and focus on what you are listening to you will be rewarded with some wonderful historical context. This makes it really easy to get sucked into the details of the lyrics.

Musically, the album is very well constructed. There is an old school heavy metal feel with hints of power metal mixed in making for a nice experience. Unfortunately, I did feel that the keyboard got lost in the mix a couple times in some songs but otherwise the mix is well put together. All the players seem to have good chemistry. Musically, it never seemed like anyone was overshadowing anyone else but instead every players style and skill complemented everyone else.

Lyrically, the songs are very well written. They tell interesting stories and do not feel overly repetitive. Vocally however I think some songs got a little out of the range of Chris Simpson. There were some parts where it sounds like he struggles to get the note just right. Particularly in the higher ranges. Songs like ‘Rifles’ and ‘Forlorn Hope’ stay a little lower and therefore complement Chris’s vocal range better. It was subtle and I don’t think it took too much away from the experience, but I could see it bugging some people. Chris has such clean and clear vocals that maybe very small things you would otherwise never pickup on are noticed. I think that maybe a little more breakup like we heard in ‘Die Hard’ when he was chanting “stand, reload, and fire” would really help.

Overall, I would say this is a very fun album, particularly if you are a fan of history. It is an enjoyable experience but not earth-shattering and probably not going to appeal to everyone. I would say give this one a listen first before you buy. I think many people will find something they like here. It is definitely worth giving a chance and because many of the songs are already on the band’s official YouTube or earlier versions of the songs that were on their EP before being added to this album, it is not difficult to see if you like what you hear. I also think that these songs would lend themselves very well to a live performance.