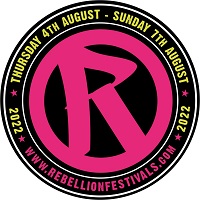 Organizers of the Rebellion festival have issued one of the most hard-hitting indictments yet of the Government’s lack of support and guidance for large-scale independent music events.

Having confirmed on Friday past that this summer’s weekender, which had been due to take place in Blackpool from 6-9 August, has been called off for the second successive year, the organizers have launched a withering barrage of criticism against the authorities and their continuing failure to provide any clarity to events such as Rebellion, as well as number of other independent festivals, including 2000Trees and UK Tech-Fest, who similarly have been forced to bite the bullet and postpone their events until next year.

A Rebellion spokesman told us:

“Despite the intention, desire and willingness of Rebellion, the venue, the bands and the local businesses for this year to go ahead, it has become increasingly clear that due to circumstances beyond the festival’s control, it can’t. With no clear guidelines from the government in terms of insurance, guarantees, policies on re-entry, testing and potential vaccine passports, the festival simply can’t go ahead.

“Rebellion has been open and transparent throughout this pandemic and were hopeful (but cautious) about this year but required a few essential things to be confirmed for the event to go head. The feeling is that music festivals are being ‘timed out’. No one is saying they CAN’T go ahead, but nothing is in place yet that means they CAN either. That is why the last few weeks have seen many independent festivals take the tough decision to cancel and we know there are many more that will soon be making their announcements too.”

This latter pronouncement proved to be true earlier today, when Ramblin’ Man Fair also confirmed that it would not be opening its gates as planned.

In their incredibly detailed statement, the Rebellion organizers went on to explain that the main factor in making the decision to postpone again is the fact that they had been unable to secure insurance for this year’s event.

“Despite continuous calls from our industry over the past six months, the Government have refused to provide us with protection via a Government-backed insurance scheme. They clearly do not believe in their own roadmap, or certainly not where live music is concerned. After much publicity surrounding the UK Governments announcement that (subject to criteria being met), life would return to normal after 21 June with no restrictions, we were all led to believe that a summer of events would be possible. If this is true, then such a scheme would cost the Government next to nothing as no-one would be making a claim! The fact that they have yet to offer such a scheme indicates that there is still uncertainty regarding festivals being able to proceed.

“If the last year has taught us anything, it’s that nothing is certain, and things can change at the 11th hour. The roadmap could change, additional restrictions could be introduced at any time or there could be local lockdowns. We accept this. We’re in the middle of a pandemic. However, without COVID cancellation insurance in place it’s simply too much of a risk and could spell the end of Rebellion forever if we were on site, building stages and then told we couldn’t go ahead.

“Not having insurance is too much of a gamble. We might as well flip a coin and we are not prepared to do that to ourselves or our community.”

Insurance aside, the Rebellion team highlighted several other issues, including the lack of guidance as to how people they would be able to allow on to the site at any one time.

“As of today, we still don’t know what we have to do in order to legally operate an event of this size. There are rumours of getting covid tests on site, having them in advance, vaccine passports, reduced attendances, social distancing etc., etc. But equally there could be no restrictions. But that’s too vague this late in the day for us to start planning things operationally.

“There are currently test events and pilot schemes running. The outcome of those will determine what we must put in place. All these schemes have some form of Lateral Flow Testing in place before entrance is allowed. So, it’s fair to assume that will form part of the criteria for entering events. The problem for Rebellion is that, unlike a festival in a field where you pitch up and stay for four days, we are based in a highly populated town centre and our event allows re-entry. As much as we love the Winter Gardens, we can’t keep everyone on site for 14 hours a day with no re-entry! Therefore, a negative test is pointless if everyone is then in/out and mixing with non-festival attendees in bars/restaurants etc.

“So, on balance, we are not going to be able to return to a full capacity, non restricted, re-entry event this year. We are still planning our event but ensuring the date is moved accordingly so that it will finally be business as usual.”

They also highlighted ongoing, and likely future, travel restrictions, emphasizing that they applied to both fans and bands (this year’s festival had been due to see headline appearances by US acts such as Circle Jerks and Bad Religion):

“The Rebellion family is global. Around a third of people that attend are from overseas. With travel restrictions still an issue, we are aware that many people will not be able to attend and therefore refunding a third of all tickets would put us in an extremely difficult position if we then had the same costs in staging the event. We think it’s best to stage a full-scale Rebellion at a time where we can host all our ticket holders.

“Finally, the last week has seen many agents and bands from overseas pull their European tours and reschedule them for 2022. So, it wouldn’t be the festival we wanted to stage anyway.

“Whilst we were desperate for Rebellion to take place this year, we are also mindful that we bring thousands of people to a residential area and until the data on mass gatherings is complete, we have a social responsibility to Blackpool, the town and its residents to ensure that our event is not a cause for any increase in the disease. We were hopeful that with the vaccine programme and the test events there would be clarification that an indoor event such as ours would be safe. But we will not get that report until the middle of June by which time it will be too late to put on a festival of this size anyway.”

Shining some light at the end of the tunnel, it has been confirmed that the world’s biggest punk rock Rebellion will return to Blackpool over the weekend of 4-7 August 2022, and with the addition of an outdoor stage, located at the base of the city’s iconic Tower. All existing tickets remain valid (although day tickets will automatically be refunded). Full details can be found on the official website.