With just 41 days to go to the festival’s return, some last-minute changes have been announced for the Bloodstock Festival, after more bands had to pull out due to ongoing travel restrictions.

The biggest change comes to the Thursday night Sophie Lancaster Stage headline slot. Swedish melodic metallers Night Flight Orchestra have been replaced by UK metal madcaps Lawnmother Deth, who had this to say about the change:

“We are truly sorry you’re not going to get Night Flight Orchestra. They’re terrific and awfully melodic. Naturally as the B-TEC replacement for them, we sound exactly the same, so your disappointment should be somewhat abated. Just think melodic Swedish hard rock, with balloons. However, the chance to get in a field, well a tent, with you lovely lot and some beer… did we mention beer: is the bar open yet? Bloodstock, we’re coming! At our age, slightly slower, but we’ll be there. Bring beer. And dancing shoes. And beer.”

Replacing Lost Society on Friday’s Ronnie James Dio main stage are New Blood stage alumni Divine Chaos, who shared their excitement at playing one of the biggest metal stages in the UK:

“Bloodstock is woven into the very fabric of Divine Chaos. Having had the pleasure of playing both the Sophie Lancaster and New Blood Stages, not to mention countless messy weekends as attendees, we are beyond delighted to have the opportunity to play on the Ronnie James Dio stage, long considered the holy grail of UK underground metal. We’re eternally grateful for the faith that the Bloodstock crew has put into this band over the years, and can’t wait to showcase ‘The Way to Oblivion’ on the greatest of stages.”

In the final trio of changes, Savage Master’s Friday RJD Stage opening slot is taken over by Lotus Eater, who release their debut album, ‘Where The Body Goes’, later this month via Hopeless Records, thrashers Shrapnel replace Noctem on Friday’s Sophie stage, and black metallers Necronautical take over the Sunday Sophie Stage slot previously due to be filled by Blasphemer.

There also has been one more addition to the previously announced Jager stage line-up, with Spectral Darkwave bringing what they describe as their “hi-definition musical tour of human horror in sonic technicolour” to Sunday’s proceedings. 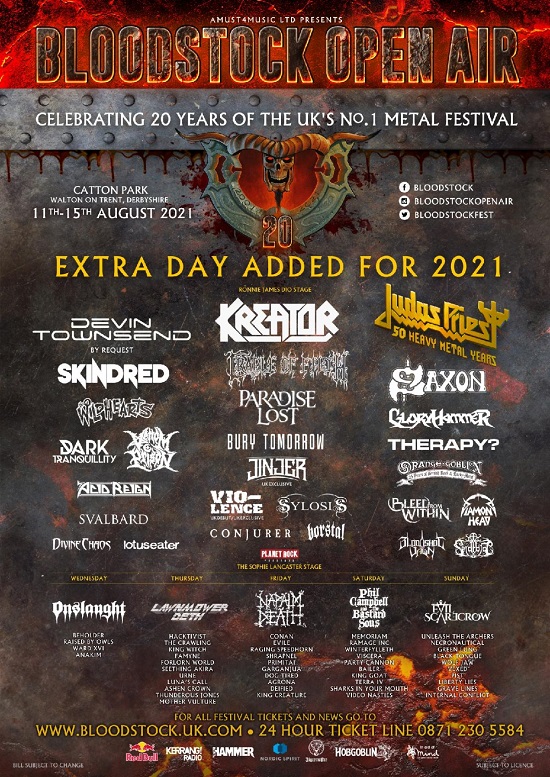