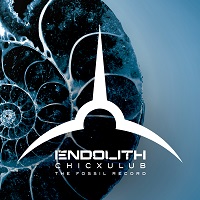 Here’s a new one: dinosaur metal. With Vikings, pirates, Romans and ancient Egyptians all getting albums dedicated to them, why not the giant reptilian monsters that once walked the Earth? ‘Chicxulub: The Fossil Record’ is the second full length by Norwegian trio Endolith and the follow-up to ‘Voyager,’ their well-reviewed but little-heard debut. Chock full of progressive-death, it’s a head-spinning ten tracks and will hopefully prove to be their breakthrough.

It’s named after the Chicxulub Crater in Mexico which is widely believed to be where the asteroid that wiped out the Dinosaurs struck sixty-five million years ago. Appropriately enough, the album sounds absolutely huge. They make a massive amount of noise considering there’s only three of them and each track is an off-kilter, headbanging delight. These songs don’t follow any strict pattern but are firmly rooted in death metal. There’s deep, stomach churning growls and thick riffs aplenty, but there’s also orchestral sections and a stubborn refusal to adhere to the verse/chorus cliché giving it a unique atmosphere.

At times this makes them reminiscent of Gojira but Endolith are no copycats. They’ve absorbed a heavy stoner influence as well, which is most obvious on the closing ‘The Earth Died Screaming.’ This late entry on the track list makes listening to the whole album in one go worth every second; it’s a jaw-dropping mix of spoken word vocals, bluesy melodies and an utterly crushing chorus. It’s the kind of song that could only be written by men with beards and is going to be a sure fire hit on tour.

There’s some quality material peppered throughout the preceding songs too. ‘Icthys’ is already available online and we’d very much suggest checking it out if you’re even vaguely interested in this. It’s one of their more melodic cuts and comes with a slightly cinematic vibe, plus one of their rare uses of clean vocals. ‘Mount Evidence’ on the other hand is a stomping five and a half minutes reminiscent of a Sarcosuchus dragging a Herbivore into deep water. It’s a blood-spattered and dark song, while ‘Rex’ is as daunting as the Carnivore its named after.

Elsewhere, there’s the beautiful ‘Diseasons,’ a song which brings serious emotional heft to mass extinction and the epic title track, but when it comes down to it there isn’t a bad song on ‘Chicxulub.’ Despite a hefty run-time it leaves you wanting more and with luck, they won’t remain in the small clubs for much longer. One or two of the tracks are maybe a bit long and this isn’t quite as game-changing as when Gojira dropped ‘From Mars To Sirius,’ but it’s still a remarkable piece of work. We’re less than halfway through January and have an album of the year contender already.