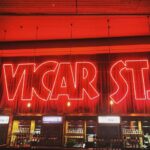 One of Dublin’s top concert venues, Vicar Street, has been damaged in a fire.

The blaze was discovered shortly before noon yesterday (Monday 28 October), but was reported to have been brought under control by Dublin Fire Brigade just over an hour later.

Neither the cause of the blaze, which is believed to have started in the roof at the rear of the building, nor the full extent of the damage are known at this stage. However, the fact that that the fire was brought under control so quickly suggests that damage may be minimal.