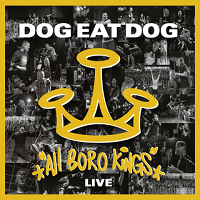 Formed when Mucky Pup bassist Dave Neabore and guitarist Sean Kilkenny quit to find an avenue for songs they had been writing but which didn’t find the band’s style, New Jersey’s Dog Eat Dog are regarded as one of the pioneers of the hardcore punk/hip hop/rap/ska crossover style. They quickly hit their stride in 1994 with the release of their debut album, ‘All Boro Kings’, which not only saw them become one of the first bands to feature saxophone as a prominent element of their sound but also spawned them three moderately successful singles, one of which ‘No Fronts’ was featured on the legendary ‘Beavis And Butthead’ cartoon series.

With ‘All Boro Kings’ celebrating its 25th anniversary this year, DED did what most bands do when marking such important landmarks and took to the road playing the album in its entirety. One of the dates of the European leg saw them headlining the warm-up party for the Rock am Ring festival – a performance which has been captured for the purposes of this CD/DVD package.

The latter element is a fairly standard presentation, using multiple camera angles to capture every aspect of the stage show, and reflects the energy and commitment the band obviously still feel to this day. The only problem is some of the cameras seem to have been placed directly in such a way as to capture nothing but the light show, and the visual aspect suffers from loads of white washout. But, that’s a minor quibble.

However, it is not a straightforward concert presentation, as each song is followed by a brief interview segment, where the band members talk about the recording of ‘All Boro Kings’ and the inspirations behind it. There are also insights from the band’s long-serving tour manager, and part-time vocalist, Dan Mallman, and long-time friends such as Jason Christopher, who provides a rather interesting insight into his relationship with fellow bassist Neabore. There is also backstage footage which, along with the interviews, probably could have been extended and included into a mini-documentary of some sorts rather than interrupting the flow of the live performance – something which is emphasized on the CD version, where the above interjections are edited out, and the resulting split second gaps between the songs make it sound like a studio album rather than a homogenous live recording.

The DVD is completed by highlights of their 2017 appearance at the behemoth that is Wacken Open Air which, if I’m to be honest, slightly overshadow the main presentation in terms of the quality of the production values.

The faults above aside, this is decent enough record of a band who served to break a lot of ground back in the day, as the hip kids apparently say, and still know how to deliver on every level – certainly frontman John Connor continues to display plenty of deceptively youthful energy. It no doubt will appeal to dedicated long-term fans of the band – and might earn them a few new ones curious to find out what all the fuss has been about all these years…

A sidebar… I mentioned above that one of the singles from ‘All Boro Kings’ had been featured on the MTV series ‘Beavis And Butthead’. Well, showing ‘What Comes Around’, another of the singles, ‘Who’s The King’, is currently being used by a certain satellite broadcasting company to promote the latest run of Scott Bakula’s drama ‘NCIS New Orleans’. Just goes to show you can’t keep a good tune down…