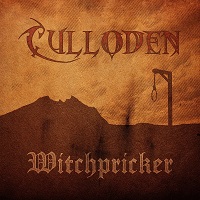 “We are Culloden and we play heavy metal.” Well, you can’t get much of a more succinct introduction that that, can you? Short and to the point.  Just the way we like. The band go on to inform us that they are from the hotbed of the Eighties’ NWOBHM movement, the north-east (Newcastle-Upon-Tyne to be precise) and are “heavily inspired and influenced by some of the legendary acts from our home region that have graced [us] with their heavy metal majesty, citing especially the likes of Venom, Satan, Mythra, Raven, Tysondog, Atomkraft, Avenger, Spartan Warrior and Battleaxe. Culloden trace their roots back to 2010, but admit they didn’t take things too seriously at first, not really coalescing as a musical entity until two years; and, now, they are introducing themselves to the wider world with this, their debut EP…

With their influences displayed very clearly on their sleeves, Culloden do not stray too far from the traditional NWOBHM path: in fact, they stick to it pretty damned rigidly, not once deviating from the objective they have set themselves, and that clearly is to evoke the spirit, and the sound, of that classic era in the development of modern metal. There are big, beefy riffs, intertwining guitars, militaristic drum beats, massive rumbling bass lines and acidic vocals, all coupled with a rough ‘n’ ready production that sounds like it has been recorded in a basement with played through one set of speakers, themselves located in the next room.  And that’s just the first half of opener ‘Lindisfarne’.

But, I think that’s the point: heavy metal, in the form in which Culloden play it, is not designed to be fancy, filled to the brim with all the latest bangs and whistles. It is supposed to be visceral, energetic and, well, rough ‘n’ ready. And, in that, Culloden succeed. They evoke the era which spawned them with affectionate retrospection, and pay homage to the sound which, by and large, shaped most of the metal we know and love today with honesty and a no-nonsense see you at the end, fuck off if you don’t like it, approach. Well, I’ll not be fucking off anytime soon, ‘cos I do like it. Sometimes it’s refreshing to hear something that is so raw and just inanely good fun: ‘Witchpricker’ provides that sort of refreshment. Now, where’s my battle jacket as I’m heading down the front to fight the forces of musical mediocrity?